The aftermath continues following one of the wildest baseball brawls in recent memory. Jesse Winker, perhaps the most prominent participant and agitator in the dust-up, will begin serving his six-game suspension today.

The former Red was initially handed down a seven-game sentence from Major League Baseball, but it has been reduced after appeal.

The 27-year-old is hitting .261 with five homers and three steals in 306 plate appearances this season.

Winker has struggled in his first season with the Mariners following a career year with Cincinnati. The lefty set personal bests in average (.305), homers (24), RBI (71), and runs (77) in 2021 but is barely hitting his weight this season. The 215-pounder is hitting just .226 with six long balls and 33 RBI.

The M’s will start life without Winker with an evening matchup against the San Diego Padres on Monday. Seattle sends Chris Flexen (4-8, 4.32 ERA) to the mound to be countered by Friars’ lefty Sean Manaea (3-3, 3.92 ERA).

FanDuel Sportsbook has Seattle as +154 moneyline underdogs and +1.5 (-134) on the run line. The Padres sit at -184 home moneyline favorites and have +112 odds to take this game by at least two runs. 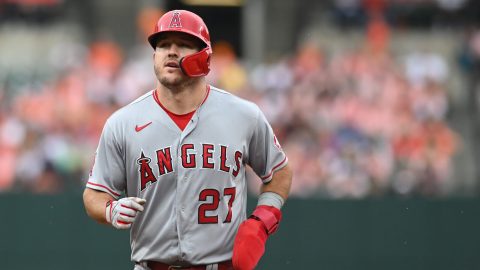