Brandon Spikes may be trying to get into the best shape of his career while training down in Florida, but it doesn’t look good to be the only healthy player not in Foxboro for Patriots OTAs.

While Spikes is being spotted by former teammates biking around in the sun, the rest of the linebackers are taking valuable reps. Dane Fletcher has been getting the most opportunities in his place, but the Patriots have multiple versatile options that could potentially jump over Spikes on the depth chart if he’s not careful.

Jerod Mayo and Dont’a Hightower both have the ability to play middle/inside linebacker. And if that occurred, Jamie Collins or defensive end/linebacker hybrid Rob Ninkovich could take their place at outside linebacker. Spikes is attempting to morph himself into a three-down linebacker, but chances are Hightower and Collins will take some of the second linebacker snaps next to Mayo on third down regardless of what kind of shape the Florida product is in.

Spikes’ rookie deal runs out after this season, so maybe he sees the writing on the wall after New England took Hightower in the first round in 2012 and Collins in the second round this year. He may be positioning himself for a better contract in 2014 with another team, but he has to get on the field first.

On this week’s podcast, NESN.com NFL editors Doug Kyed and Luke Hughes discussed all they saw at OTAs on Wednesday. They also talked about the improved Patriots defense, how Rob Gronkowski‘s back surgery affects the tight end depth chart and how T.J. Moe‘s injury could shake up the wide receivers.

Listen in below or download the podcast on iTunes for all the latest on the Patriots and the NFL. 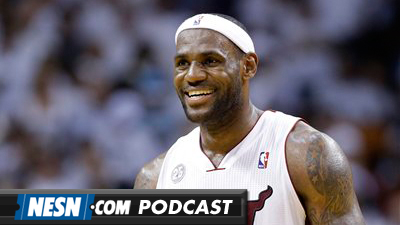