There are a lot of similarities between Rajon Rondo and Deron Williams.

Both are NBA point guards in their mid-to-early 20s. Both have seen their assist totals rise steadily in each season they've played. Both are among the elite players in the NBA at their position.

And both are probably getting pretty tired of being overshadowed.

For Rondo, it's a matter of hiding in the shadows cast by the Celtics' three veteran superstars. Kevin Garnett, Paul Pierce and Ray Allen are the Big Three — and Rondo, who stands a modest 6-foot-1 on a good day, is the little guy. He's the team's catalyst on the floor and an absolute monster on the stat sheet, but he's got few individual accolades to show for it.

For Williams, it's a matter of an old rival named Chris Paul. Think back to the 2005 NBA draft: Utah, picking No. 3 overall, had the choice between two collegiate superstars who could slide into the starting point guard spot right away. There was D-Will from Illinois and CP3 from Wake Forest. Decisions, decisions.

The Jazz took Williams. Paul has spent the last half-decade trying to make them regret it. And with a Rookie of the Year plaque, two All-Star selections and a 2008 nod to the All-NBA First Team, you could argue he has.

This could be a pivotal season for the Jazz point guard. Star power forward Carlos Boozer is in the final year of his contract with the team, and the window is rapidly closing for Williams to prove that he can win in Salt Lake City. He's been to the Western Conference playoffs three years running, but he's never had so much as a whiff of NBA Finals action.

On Wednesday night, Williams' validation tour visits Boston, and the Celtics will get a chance to see firsthand what this Jazz team and its floor leader are made of.

And Rondo will get a chance to upstage him.

The Celtics' fourth-year point man has already been through a lot this season. He's taken on Paul, the Bulls' Derrick Rose, the Suns' Steve Nash, the Nets' Devin Harris and the Sixers' Lou Williams. He's had to deal with some intense trash-talking from the New Orleans Hornets on the floor and an eight-figure contract extension off it. It's been an eventful couple of weeks, but it doesn't get any easier from here.

He has drawn a tough matchup in Williams. The Jazz guard is a physical team defender, a knock-down jump shooter and an impeccable passer. You can compare him to Chris Paul all you want, but Deron Williams is a superb player in his own right.

So is Rondo. And he's been threatening for a long time now to emerge as the game's next superstar.

This could be a breakout season for one of these two point guards. They've got seven seasons, 4,000 assists and zero All-Star selections between them in their careers. They're both aspiring to bigger and better things.

And Rondo — with his intelligence, his intensity and his altogether freakish athleticism — could quite possibly be the better of the two point guards.

The best way to prove that is to do it head-to-head on Wednesday night. The Celtics, riding high at 7-1 and looking like the class of the NBA, take on the Jazz, who endured a nightmarish run last week and now sit under .500 at 3-4.

One of these two point guards will emerge victorious. One of them, after a long time of being overshadowed, will have the spotlight on himself. He'll then spend the rest of the season trying to keep it there. 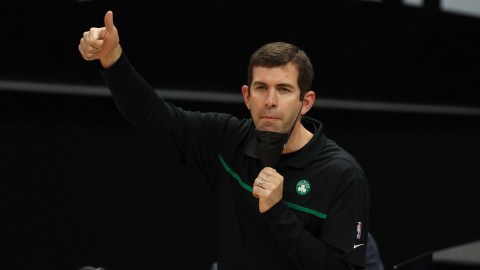