Ask Rex Ryan about his feet or his wife’s feet or his dog’s feet or anyone else’s feet, and the Jets’ head coach will tell you it’s a personal matter. Ask him about the Super Bowl, though, and he’ll start flapping those gums.

“I thought we’d win it last year,” Ryan said after the Jets’ 38-7 win over the Bills on Sunday. “I think we’re going to win it this year, so we’ll see. Regardless of who we play, we think we’re better than any team out there. We have to go prove it, though.”

Ryan then added a profound bit about the playoff competition.

“If somebody is going to beat us,” he said, “then they must be really good.”

Though additional photos of Michelle Ryan reportedly surfaced on the Internet over New Year’s weekend, Ryan has adamantly refused to address the topic, saying repeatedly that it’s a personal matter. You’d think that would be the mark of a guy unwilling to distract his team from a must-win playoff game next week … but based on his discussions of already winning the Super Bowl, you’d be wrong.

“I said the day I took this job, that I came here to win Super Bowls,” he said. “That’s the truth. I have none right now, but I know one thing: Whoever we play is going to get my best shot. They’re going to get this team’s best shot. And let’s see if we’re not good enough to win this whole thing.”

But perhaps Ryan just takes solace in the fact that win or lose, he’ll have a nice pair of feet to come home to at the end of the day. “We had a meeting in the locker room after the game with a bunch of farewells. If [Randy] Edsall already had this decision made, we’re kind of shocked he wouldn’t have said anything then.”
–UConn football player Twyon Martin, on the surprise of his former head coach to leave the program without telling his players

This fan is giving hockey players a bit too much credit for thinking about the long-term future of a franchise on a nightly basis.

“Obviously, the team and coaches don’t stand behind him… If you don’t play well in front of a goalie, then you clearly don’t want him to be your future.”
–t

When you factor in the thin Colorado air, this dance is all the more impressive.

Danny Woodhead Suffers Likely Concussion in Win Over Dolphins, Dan Connolly Could Be Back for Playoffs 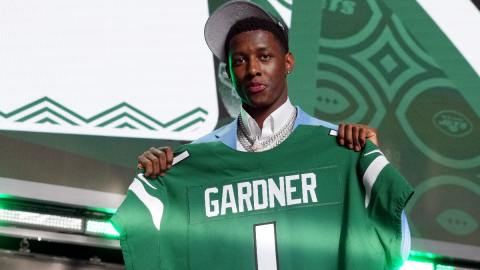