DeMarcus Cousins Stranded in Sacramento After Being Barred From Team Flight Due to Altercation - NESN.com Skip to content

When DeMarcus Cousins, a top-two talent, fell to Sacramento with the fifth pick in the 2010 NBA draft, there were only two words used to explain what had occurred: "character issues."

The Kings may have gotten a steal in the draft, but they surely did get the issues too. This time, though, they've left them in Sacramento — literally.

Following 99-97 Saturday's loss to the Thunder, Cousins was barred from the team's flight to Phoenix for getting in an altercation with teammate Donte Greene when Cousins did not get the ball on the team's final possession.

As a result of the incident, Cousins missed the team flight to Phoenix after the game, presumably because he had been barred from flying.

The play in question, apparently, was not even drawn up for Cousins, according to the Sacramento Bee.

"We had Omri and Beno cutting to opposite corners and Tyreke setting a back pick for DeMarcus and Donte inbounding the ball to see who was open. He was going to get it to whoever was open and get it in and spread the floor and attack since we only had five seconds to go. We tried to get a two if we could but a three would be fine. DeMarcus was kind of open but would have been kind of risky. Tyreke had a good look at a three and it just didn't go in," said coach Paul Westphal.

This is the third incident involving Cousins this season. He's also been tossed from practice and had a verbal altercation with a training-staff member.

Kings president Geoff Petrie will decide whether or not to discipline Cousins.

Is DeMarcus Cousins the new Rasheed Wallace? Ron Artest? or is he going to be out of the league in two years? Leave your thoughts below. "I'll be totally honest I hate wisconsin.. With a passion Yeah I said it !!! I can't wait to play them again next season!!! Just being honest"
–Ohio State wide receiver Devier Posey, on Wisconsin

The Yankees rotation may not be deep, but is it this bad?

"i think i can throw harder than freddy garcia….i the scary for the yankees hes there leading canidate for the starting rotation lol"
–bakerlegend11

What would be the first thing you'd do after winning the Super Bowl be if you were Clay Matthews? Make a WWE appearance.

Liverpool Mailbag: Maxi Rodriguez Looks to Be Odd Man Out After Andy Carroll, Luis Suarez Get Up to Speed 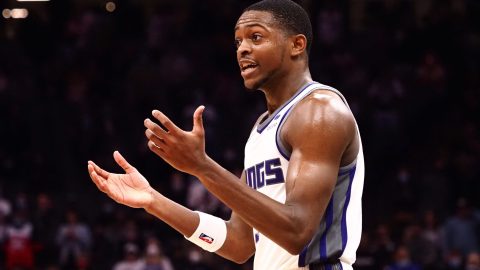