There's minimal movement at the top of the draft, but some surprising names fell into the late teens and early 20s of this mock. As we get deeper and deeper into these discussions, it's becoming clearer as to which teams could really affect how certain players fall.

More than anything, the quarterbacks could be the deciding factors in the fate of many prospects. Since they've all got question marks, there's really no telling when a team might get that itch to add a first-round quarterback and the responsibility that comes with making such a pick. Plus, the rookie wage scale — if there's a new CBA, the 2011 draft class will have a rookie scale, but if there's still a lockout, the scale will be highly unlikely — will have a heavy impact on which quarterback goes where.

Let's open up Mock Draft III, the third edition of 13 mock drafts that will run every Thursday until April 28.

2. Denver Broncos
2010 Record: 4-12
Needs: Defensive end, cornerback, safety, outside linebacker
The Pick: Clemson defensive end Da'Quan Bowers
Analysis: During his final season at Clemson, Bowers had 15.5 sacks and 24 tackles for loss. He had his knee scoped in January to repair a partially torn MCL, according to the Charlotte Observer, but it would be shocking if that causes him to fall down the draft board.

3. Buffalo Bills
2010 Record: 4-12
Needs: Quarterback, tackle, defensive end, outside linebacker, tight end, cornerback, safety
The Pick: Texas A&M outside linebacker Von Miller
Analysis: The Bills have said they're interested in Auburn quarterback Cam Newton, but that is way too much of a gamble at this spot, where they should be happy to considerably improve their pass rush with Miller.

4. Cincinnati Bengals
2010 Record: 4-12
Needs: Defensive end, quarterback, running back, wide receiver, inside linebacker, safety
The Pick: North Carolina defensive end Robert Quinn
Analysis: Again, not really very big on the prospect of adding Georgia wide receiver A.J. Green to this offense, especially when Quinn could add even more punch to a talented front seven that was hurt by injuries in 2010.

5. Arizona Cardinals
2010 Record: 5-11
Needs: Quarterback, left tackle, guard, outside linebacker, cornerback
The Pick: LSU cornerback Patrick Peterson
Analysis: Peterson might wind up receiving higher grades than Von Miller and Robert Quinn, and if he's still on the board here, the Cardinals shouldn't have a problem turning their card in on time.

7. San Francisco 49ers
2010 Record: 6-10
Needs: Quarterback, outside linebacker, defensive tackle, defensive end, safety, wide receiver
The Pick: Nebraska cornerback Prince Amukamara
Analysis: It might be tempting for the 49ers to consider taking a defensive lineman like Alabama's Marcell Dareus, but Amukamara is widely considered to be a top-10 talent.

8. Tennessee Titans
2010 Record: 6-10
Needs: Quarterback, inside linebacker, defensive end, guard
The Pick: Missouri quarterback Blaine Gabbert
Analysis: There are many more talented players on the board, but there are times when teams need to take a quarterback from a public-relations perspective. It doesn't always make sense, but that's the way it is.

9. Dallas Cowboys
2010 Record: 6-10
Needs: Tackle, defensive end, guard, safety, cornerback
The Pick: Colorado tackle Nate Solder
Previous Pick: Alabama defensive lineman Marcell Dareus
Analysis: It's easy to go back and forth with this. Jerry Jones has preached the importance of adding an offensive lineman, and they're almost certain to be in position to take the first lineman in the draft. But can Jones avoid the temptation of adding a defensive playmaker who could make an impact on the highlight reels?

10. Washington Redskins
2010 Record: 6-10
Needs: Quarterback, right tackle, wide receiver, right guard, cornerback, safety, defensive end
The Pick: Arkansas quarterback Ryan Mallett
Previous Pick: Auburn quarterback Cam Newton
Analysis: This is easily the toughest pick to forecast in the top 10 because the Redskins could go with a quarterback, wide receiver, defensive lineman or tackle. To add to those complications, those positions have some worthy players at this spot. 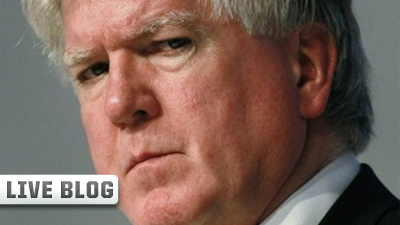 Adrian Gonzalez Not Concerned With Albert Pujols, Looking Forward to ‘Many Years’ With Red Sox