When the Bruins got the privilege of hosting the Winter Classic at Fenway Park in 2010, Hockey East eagerly jumped on board.

A week after the B?s topped the Flyers on New Year?s Day, the college players got their turn at "Frozen Fenway" as Northeastern met New Hampshire in an afternoon women?s affair, followed by Comm. Ave. rivals Boston College and Boston University in a nightcap men?s tilt.

Though the Winter Classic will not be in Boston this winter, Fenway Park will again host college hockey as Maine, New Hampshire, Massachusetts and Vermont take to historic Fenway for a Hockey East doubleheader on Jan. 7.

"They [the Red Sox] had left it open that maybe we should talk after the success of the first one," Hockey East commissioner Joe Bertagna said at the league?s media day on Tuesday inside TD Garden.

The event will be part of "Hockey Day in New England" in which local puck heads will have a vested interest. The Bruins will play a matinee contest at TD Garden with their adversaries from the Stanley Cup Final, the Vancouver Canucks. After the Black and Gold are finished, the focus shifts to Fenway, where UMass and Vermont will tangle at 4 p.m., followed by Maine and UNH at 7:30 p.m. All three games will be televised by NESN.

"We?re very honored to participate in that event," said Maine head coach Tim Whitehead. "We can?t thank commissioner Joe Bertagna enough for showing the confidence in the four state schools to represent the league and sell out the building. I think it?s going to be a great statement for our league that we can put four non-Boston teams in that type of event and bang it out, so we?re thrilled to be a part of it and we?re looking forward to it."

The first Fenway event proved to be a box office success as 38,472 packed inside America?s Most Beloved Ballpark to watch the UNH women defeat NU 5-3 in the first game and the BU men edge BC 3-2 in the second game. Instead of again inviting the local Boston schools, Bertagna chose to go in a different direction.

"It was my idea to kind of mix it up a little bit and go with the four state school teams in our league," Bertagna said. "I thought it was a concept that would sell well. Here we are a couple weeks after the tickets went on sale and I think we?ve sold somewhere over 34,000, and I think that indicates it?s a concept that resonated with people."

After his team got the opportunity to play in the showcase event two years ago, BC head coach Jerry York said he knew it wouldn?t be the last time college hockey would take center stage at Fenway.

"I think it shows the appeal college hockey is at right now," York said. "That?s a great spectacle when we had a chance to play there. All four institutions — the players, the coaches, the fans — will all have a chance to enjoy the experience."

Whitehead said the response from his players was immediately enthusiastic once the news hit that the Black Bears would be playing in the doubleheader.

"We have quite a few New England kids on our team, and in particular our two captains [Brian] Flynn and [Will] O?Neill grew up in the Boston area, so they?re chomping at the bit," he said. "This is actually a home game that we gave up for this, but it?s worth it. The opportunity for that type of experience is one they?ll never forget."

For more information on the event check out redsox.com/frozenfenway or call 877-REDSOX9. 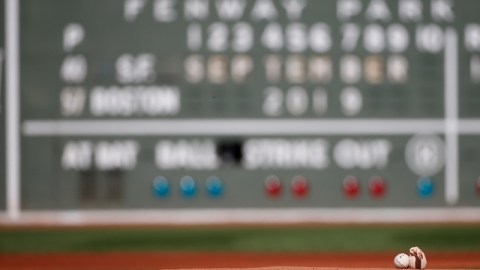