It's not time to celebrate Hannukah, but the next time you or someone you know does, they will have to do so knowing one of the holiday's best songs is outdated.

Rod Carew admitted in an interview with TMZ.com that contrary to what Adam Sandler sings in his famous "Hannukah Song," the Hall of Famer never did convert to Judaism.

"I was about to convert and I never did," Carew told TMZ. "I think Adam found out about it."

That mean's Sandler's immortal follow-up to revealing O.J. Simpson's religion will need a tweak at its next performance, unfortunately. However, there was some good to come out of the mistake.

Carew reveals that he struck up a friendship with Sandler after the song came out, and that he was "honored" to be included in it, even erroneously.

"We're still friends," Carew declared when asked if there was any ill will between he and the comedian due to the mix-up.

In his 19-year major league career, Carew played for the Angels and Twins, where he won a Rookie of the Year award in 1967 and a MVP nod in 1977. The 18-time All-Star was inducted into Cooperstown in 1991, but for a generation of fans his appearance in Sandler's 1994 hit could be his more well-known claim to fame.

Despite this revelation, we're guessing it's still going to be a lot of fun-nukah to celebrate Hannukah. "Put on your American jersey. That's who you played for tonight."
–Canadian forward Melissa Tancredi, to the ref who officiated the USA-Canada Olympic soccer semifinal

uhhh @oiler79ryan where's that team that won the STANLEY CUP this year Located?! 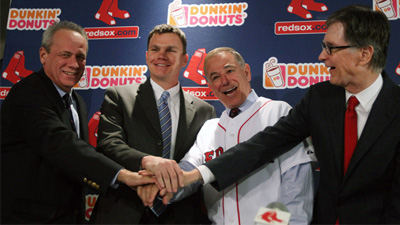 John Henry Writes Letter Pledging Support of Bobby Valentine, Declares ‘We Are Not Making a Change in Manager’