Who you gonna call, University of Iowa baseball players?

Six members of the Iowa Hawkeyes have already phoned up the real-life equivalent of the Ghostbusters, according to the Daily Iowan, after the players appeared to be living with two other roommates they didn’t even know about. A long-deceased little girl and grandfatherly man are also inhabiting the players’ living space, according to paranormal researchers.

?We?ve lived here over the past two years,? junior pitcher Aaron Smit said. ?But over the past few months, we noticed things getting a little bit weird. We had a kid in here who thought he saw a ghost — a shadow in a form of a human.?

In addition to your run-of-the-mill poltergeist interactions — objects seemingly moving around rooms, television channels switching without any reason — at least one player says he actually saw a little girl in his bedroom, and everyone in the house claims to have once heard an upstairs door being slammed multiple times. The attic bedroom of the house also seems to be a focal point, with several people saying they became “depressed” or felt malaise while inside.

The most bizarre incident, though, involved two players’ girlfriends. While the women were sleeping, their underwear was removed — while they were wearing pants — and ended up in another place in the room.

Perhaps unsurprisingly, after living in the house for two years, the players have decided to call it quits and not renew their lease. While nothing seemingly malicious has happened, they’ve had enough of “Tim” (the name they’ve given to the old man ghost) and the little girl.

?I?m on Tim?s good side,? said first baseman Brian Niedbalski. ?I want to leave it that way.? 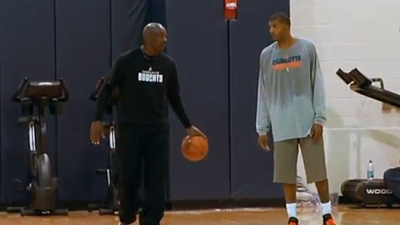