DENVER — The best start in NHL history is over. The Chicago Blackhawks finally left the ice without a point — but with their heads held high.

The Blackhawks were stunned 6-2 by the struggling Colorado Avalanche on Friday night. It was their first loss in regulation and ended a remarkable run in which they earned at least one point in their first 24 games, an NHL record.

“We’re proud of it, but it’ll be nice to move on now,” defenseman Duncan Keith said. “It’s hockey, we’ve lost games before in our lives. It’s not like we’re going to sit here and cry.”

Instead, they’ll sit back and celebrate, said coach Joel Quenneville, who told his team afterward “that they should be very proud of what they accomplished. They found different ways to win, night in and night out, and everyone contributed to something that hadn’t been done.

“It’s a great feather in our cap, but let’s move forward here and try to get better. Certainly it was a lot of fun up to today.”

Dating back to last year’s regular season, the streak was 30 games.

Chicago’s overall points streak was the second longest in NHL history. The 1979-80 Philadelphia Flyers set the league record with a staggering 35-game unbeaten streak that included 25 wins and 10 ties — all in the same season. 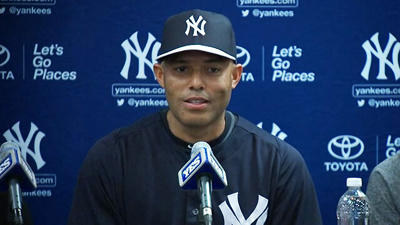 Mariano Rivera Officially Announces He Will Retire After 2013 Season (Video)