BOSTON — Twenty years from now, in a break in the action during a Celtics game at the new TD Garden, some precocious little girl or some meathead from the South Shore will show up on the video screen for one of those fan trivia contests. At stake will be a free Apple iChip, the digital music device that is installed directly into the user’s skull, and the question will hearken back to a game in 2013 when history was made multiple times in one night.

“On March 13, 2013, Kevin Garnett and Paul Pierce each reached statistical milestones for their careers,” the question will read. “Garnett passed Jerry West to move into 15th on the NBA’s all-time scoring list, and Pierce moved into the top 20 by eclipsing Charles Barkley.

“The question is, who assisted the shot that gave Garnett his 25,193rd point?”

And the fan will yell: Rajon Rondo!

At least, that is how Garnett and Courtney Lee, the guy who actually threw the history-making pass, facetiously imagined it playing out after Garnett and Pierce achieved their new places in the record books on Wednesday.

“We joked about it, but it’s a huge accomplishment,” Lee said. “It’s great for this organization that those guys are still playing and they’re still achieving goals.”

Garnett and Pierce are allergic to most mentions of their individual accomplishments, but with the more pressing matter of winning the game taken care of early in the 112-88 victory over the Raptors, the future Hall of Famers allowed themselves to briefly bask in the moment. It helped that they could share the spotlight with each other, not just as teammates but as friends.

“What you all don’t know is that Paul and I have history, and it’s only right that we come in here and we make history together,” Garnett said. “We were 13, 14, tearing up his mom’s living room, breaking vases, almost getting our asses whooped. The first time I ever experienced Crenshaw [Boulevard] on a Sunday — for you all that don’t know what Crenshaw on a Sunday is, it’s a big deal — it was Paul taking me out, being 15, 16 years old.”

Garnett long ago stopped caring about sounding overly philosophical and sentimental. One of his favorite prefaces is, “I know it might sound corny…” so it was not surprising to hear him describe hanging out with a young Pierce in Inglewood, Calif., hanging out on the legendary Crenshaw strip in Los Angeles on a Sunday night.

Pierce is typically more by-the-book. He explains his performances more often than not with a shrug, while offering his favorite cliché, “I just try to give the game what it needs.” But he, too, was effusive in his praise for his friend on Wednesday.

“Kevin could accomplish anything he ever wanted to do because he has that will, that determination,” Pierce said. “For him to be where he’s at is pretty remarkable, because it’s more than just scoring. He’s tops in so many other categories that it’s unbelievable. He’s a once-in-a-generation-type of player. Not a lot of people get a chance to play with that type of player, so I’m fortunate that I’ve been able to play with him in these last five, six years. It’s been an honor to watch him each and every day. How he prepares, how he comes to work every day, his approach, is something we all can learn from.”

The rest of the Celtics, like Lee, may laugh about the milestones. Celtics coach Doc Rivers cracked that the players are getting tired of clapping, because they have to applaud Garnett or Pierce for passing somebody on some list every game.

There is clearly a pride among the rest of Boston’s players, however, in being around that level of athletic achievement. It is evident in the presence of players like Lee, who took less money than he could have gotten elsewhere to come to Boston, and Jason Terry, who also cements his place in the record books with every game but is the most vocal promoter of Pierce and Garnett’s place in history. Mickael Pietrus, who was back in the building on Wednesday as a member of the Raptors, spent an entire season in Boston and never got over his awe in sharing a locker room with Pierce and Garnett, not to mention Ray Allen.

Pierce and Garnett have come close to being broken up the last couple of years at the trade deadline, and their attitudes toward any such moves were consistent. Pierce reiterated that he wants to retire with the Celtics, while Garnett declared that he bleeds green. Clearly, they want to stay Celtics for as long as their contracts last — one more year for Pierce, as many as two more years for Garnett — but their attachment has as much to do with each other as with the organization.

“It’s best to do it with a personal friend, not just a teammate, but a real friend,” Garnett said. “Someone that knows you, knows your family, knows where you come from and vice versa. Knows the things that motivate you and push you. I always tell people, I’ve got the greatest seat in the house to watch one of the best players in NBA history put the ball in the basket every night. It’s special to be able to do it with him.”

Dwight Howard, Lakers Back in Playoff Picture But Not Out of Danger Yet 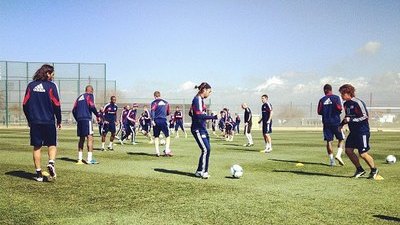