CHICAGO — Slugging first baseman Anthony Rizzo and the Chicago Cubs agreed Monday to a $41 million, seven-year contract that could be worth up to $68 million over nine seasons.

The 23-year-old Rizzo is considered one of the centerpieces of the Cubs’ rebuilding efforts. He is hitting .280 with a .352 on-base percentage. He also has nine home runs and 28 RBIs in his third major league season.

Rizzo gets a $2 million signing bonus, of which $250,000 is payable within 30 days of the contract’s approval by Major League Baseball and $1.75 million is payable next Jan. 15.

If an option is declined, the buyout is payable the following Jan. 15. If he wins the NL MVP or finishes among the top five in MVP voting at least twice, his 2019 salary increases to $12 million and the option prices go up to $16.5 million.

In addition, if he finishes among the top two in NL MVP voting in any year through 2019 and then is traded, he can void the 2021 option.

Rizzo also gets a hotel suite for road trips. His deal was negotiated by agent Marc Pollack of Sports One Athlete Management.

Rizzo got off to a slow start and there was even some speculation a few weeks ago that he could be sent to Triple-A. That was after manager Dale Sveum said players could be demoted and refused to eliminate Rizzo or Starlin Castro from the list.

Rizzo was batting just .173 heading into the game at Miami on April 26. He hit a 420-foot home run to center and a 413-foot shot to the upper deck in right field that day for his second career two-homer game. It also gave him eight for the season, the most by a Cubs left-handed hitter in April.

Rizzo was selected out of high school in the sixth round of the 2007 amateur draft by Boston, a time when Cubs president of baseball operations Theo Epstein and general manager Jed Hoyer were running the Red Sox front office. He played in just 21 minor league games in 2008 after being diagnosed with Hodgkin’s lymphoma in late April and returned the following year.

He was traded to San Diego in December 2010 in the Adrian Gonzalez deal, when Hoyer was the Padres’ general manager. The Cubs acquired him in the trade that sent Andrew Cashner to San Diego before the 2012 season, after Hoyer reunited with Epstein in Chicago. 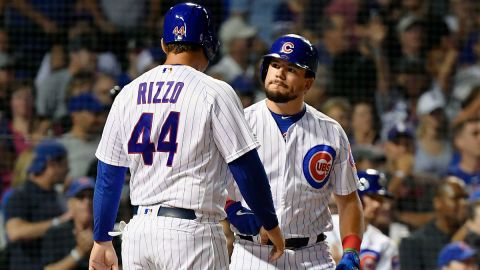