It can only get better for Radu Mitu.

The 18-year-old goalkeeper made his professional debut for Moldovan soccer team Milsami-Ursidos on Saturday, and he won’t soon forget what happened. Mitu scored one of the worst own-goals in soccer history … just ten minutes into the game.

After making a save, Mitu got up and tried to throw the ball to a defender. The ball had other ideas, as it slipped out of his hand and went straight into the goal.

The gaffe clearly embarrassed Mitu, but he kept his composure in the immediate aftermath. His teammates and coaches followed suit and didn’t yell at him. They didn’t want to make matters worse for the young shot-stopper.

However, opponents Rapid Ghidighici took care of that for Mitu. They scored a last-minute goal to win the game 2-1.

Mitu has the rest of his career to make amends for that error, but don’t expect him to replace Victor Valdes as Barcelona’s No. 1 this summer.

See Mitu’s shocking own-goal in the video below. 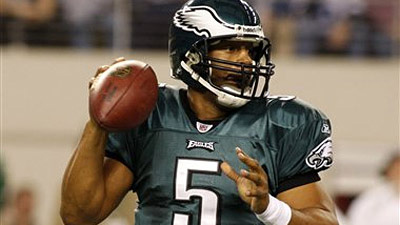 Donovan McNabb Says Syracuse Will Retire His Number This Season, Thanks Players, Coaches From His Time There