It appears that Robert Griffin III‘s recovery from knee surgery is going more like Adrian Peterson‘s and less like Derrick Rose‘s.

Griffin told Peter King of Sports Illustrated that he’ll be back Week 1 “without a doubt.” King agreed with Griffin after what the SI columnist saw while watching the second-year quarterback in practice on Thursday.

King said he saw RGIII sprint without a limp and plant and cut twice on his surgically repaired right knee. Griffin was banged up coming into the Redskins’ Round 1 matchup against the Seahawks on Jan. 6. He tweaked his knee early in that game then finally came out after getting seriously injured on a botched snap.

Griffin had one of the greatest seasons ever by a rookie quarterback in 2012 on his way to AP Offensive Rookie of the Year honors. He threw for 3,200 yards with 20 touchdowns and five interceptions. He ran the ball 120 times for 815 yards and seven more touchdowns. Washington went 9-6 with Griffin at the helm. 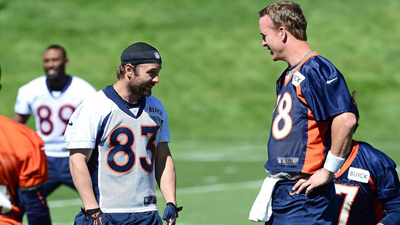 Wes Welker Says He, Tom Brady Were ‘Upset’ About Patriots Not Signing Him, Thinks He Can ‘Be Myself’ With Broncos