Just a little more than a week ago, Elliot Johnson was playing for the Kansas City Royals, seven games out of a playoff spot. He was then claimed by the Atlanta Braves, baseball’s best team, and that’s apparently rejuvenated Johnson.

That hasn’t been evident on the field, necessarily — Johnson is 5-for-18 since being claimed — but Johnson’s care-free attitude has been on display already.

Johnson hit the ground running with a Harry Caray impression (or perhaps an impression of Will Ferrell doing an impression of Caray), and he was at it again Tuesday night. Following a win over the Cleveland Indians in which he “showed off his wheels” with a two-run triple, Johnson was asked about the big hit. Instead of answering with a ton of cliches like a normal baseball player, Johnson answered like a NASCAR driver, also using a ton of cliches of sorts.

Johnson just started thanking random sponsors, as NASCAR drivers have been known to do.

See it in the video below, with a tip of the cap to SportsGrid. 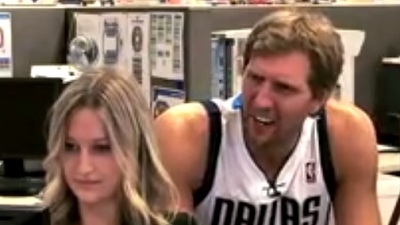