BOSTON — Baseball is the most statistic-based sport on the planet. There’s seemingly a number for everything, and those numbers are used ad nauseam to try to explain what happens on the field.

Sometimes, you just have to say, “Screw it,” and enjoy the ride.

The Red Sox are World Series bound after taming the Tigers in six games in the ALCS, and there are plenty of reasons why they’ll be facing the Cardinals in the Fall Classic. We can point to Boston’s grind-it-out offense, steady rotation, strong bullpen or deep bench. And yeah, there are plenty of stats, numbers and splits that help make sense of everything. But there continue to be moments during this incredible run by the Red Sox that simply defy logic, and make it seem more and more like we’re watching a team of destiny.

The phrase, “team of destiny,” obviously leaves much to be desired, especially among sabermetricians. But if you ask most Red Sox fans, they will tell you that this team is defined more by its character, resilience and overall unwillingness to give in — all intangible aspects of sports — than it is by any specific area in which it excels on the diamond.

This isn’t to say that rounding up 25 good guys guarantees a pennant. In fact, any team that is built solely on character is probably going to lose more games than it will win. But there is absolutely some unquantifiable aspect of sports, and it’s been at the forefront of Boston’s remarkable turnaround.

“To me, when it got special was Day 1 of spring training,” said Shane Victorino, whose seventh-inning grand slam propelled the Red Sox to a 5-2 victory in Game 6 of the ALCS on Saturday. “We came in with the mindset that we’re all going to go out and give it our best. Take one at-bat at a time, one pitch at a time, one game at a time from spring training. And it’s continued. Obviously, all-out tonight.”

Victorino’s grand slam — and the sequence of events leading up to it — serves as the latest example that something crazy is going on in Boston these days. Game 6 had no shortage of wild moments.

First, there was the play that helped Brandon Workman and the Red Sox minimize the damage in the sixth inning. Victor Martinez had just given the Tigers a 2-1 lead with a wall-ball single, and Detroit looked poised for a big inning with runners at the corners and no outs. Prince Fielder stopped running between third base and home plate on a ground ball to second base, though, and the Red Sox were able to complete a unique double play. Dustin Pedroia tagged Martinez before throwing home to get Fielder caught up in a pickle.

Then, there was the ball that Jacoby Ellsbury hit in the at-bat prior to Victorino’s slam. Ellsbury hit a ground ball up the middle with runners at first and second and one out. Jose Iglesias, who is as sure-handed as it gets for an infielder, had an opportunity to end the rally with an inning-ending double play. Instead, the ball clanked off Iglesias’ glove, and everyone reached safely, loading the bases for Victorino.

And finally, there was the grand slam itself. Victorino had been 2-for-23 with nine strikeouts in the ALCS before digging in in the seventh inning, and he quickly fell behind in the count, 0-2. Victorino’s confidence never wavered, however, and he lifted Jose Veras‘ next pitch into the Monster seats.

“I told myself to get a pitch I can handle. Try to tie the game, at the minimal. Get us back in the game and give us another chance,” Victorino said. “Fortunately, I got an 0-2 curveball that I could handle and was able to hit a home run. It was a special moment. It’s been a special year. We battled and good moments like this, you cherish.”

There have been plenty of moments for Victorino and the Red Sox to cherish this season. From walk-off home runs and dramatic comebacks to proudly representing a city in the wake of a tragedy, the 2013 Red Sox have been unlike any team Boston has ever seen. It might not be the best, but it’s one of the most special, and that’s saying something given the city’s sports lineage.

Have fun finding a number for that. 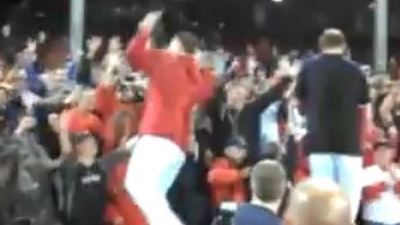