This week?s MLB GM meetings offer the Red Sox an opportunity to lay the groundwork for certain offseason moves, if they so choose. It figures that sorting out the club?s catching situation is near the top of Ben Cherington?s to-do list.

Right now, it?s unclear who will be the Red Sox? starting catcher in 2014, although there are options beyond Jarrod Saltalamacchia, who is currently a free agent. If Cherington approaches this offseason the same way as last offseason, it seems unlikely that there?s much to the A.J. Pierzynski rumor. Even if the Red Sox have ?shown some interest? in Pierzynski, as reported by WEEI.com, the polarizing backstop ultimately represents a questionable fit.

The most obvious risk of signing Pierzynski involves his accompanying baggage. There?s a difference between having a colorful personality and having a personality that evokes disdain, and Pierzynski?s behavior seemingly strikes a chord. According to an August 2012 article on SI.com, Pierzynski has in his career been voted by his opponents as the player they would most like to see beaned (2006), baseball’s meanest player (2011) and baseball’s most hated player (2012). Men?s Journal polled 100 MLB players on various topics in 2012, and 34 percent of respondents voted Pierzynski the most hated player in the game.

Clearly, Pierzynski rubs some people the wrong way. And given the tremendous clubhouse chemistry of the 2013 Red Sox, adding an enigmatic player like Pierzynski threatens to disrupt a good thing. The real value or impact of chemistry has long been debated — mostly because it?s an immeasurable aspect of a sport knee-deep in number-crunching — but if there?s one thing that everyone can agree on, it?s that having each player on the same wavelength is a positive. The Red Sox didn?t win the World Series solely because of their chemistry, but the team’s overall sense of togetherness certainly didn?t hurt matters, either.

The Red Sox? real concern regarding Pierzynski should go beyond his dubious reputation, though. After all, labels are often unfairly slapped on players. Pierzynski could have become the nicest guy in the world over the last year or so, and most would refuse to believe it simply because it goes against everything we?ve come to accept as truth. In other words, there?s really no turning back once a player — or any person on the planet, for that matter — gets labeled a jerk.

The Sox should be just as concerned about Pierzynski?s on-field performance, which, like his personality (or reputation of such), is far from an ideal match. The Red Sox? offensive approach relies heavily on driving up pitch counts, getting on base and producing timely hits. Pierzynski?s free-swinging ways aren?t really conducive with such an approach and should thus bump him down the totem pole of free-agent catchers.

Pierzynski ranked dead last among qualified major leaguers with only 3.27 pitches seen per plate appearance in 2013. His .297 on-base percentage ranked 13th out of 15 big league catchers with at least 450 plate appearances, and his 11 walks were his lowest total since 2000, during which he only had 96 plate appearances as a 23-year-old backstop.

Pierzynski did smack 17 home runs and compile 70 RBIs with the Rangers in 2013, and he posted career-highs in home runs (27) and RBIs (77) with the White Sox in 2012, so it?s reasonable to expect some power, even with him turning 37 in December. His on-base ability remains an issue, though, and his lack of patience at the plate is concerning when you also factor in his below-average defensive skills.

The Red Sox might not sign a catcher over the next three days, and it?s entirely possible that Boston will eventually opt to keep the known commodity in Saltalamacchia. If the Sox plan to dive into the free-agent waters at some point, though, they shouldn?t do any more than dip their toes in the Pierzynski market — for reasons both inside and outside of the box score. 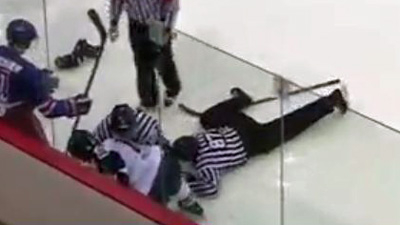 Ref Gets Knocked Out, Bloodied by Errant Punch During Hockey Fight (Video) 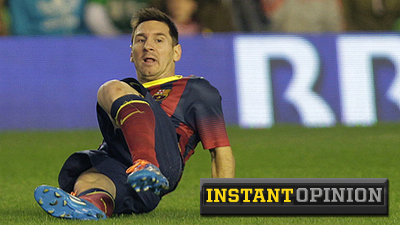