Jeff Green's Big Shot Trumps Everything and Other Impressions From Celtics' Win Over Heat - NESN.com Skip to content LeBron James came within two rebounds of a triple-double. Kelly Olynyk made his first start as a professional and looked just like a rookie most of the time. The Celtics let the Heat shoot 57.7 percent and gifted them 34 free throws.

And none of that mattered.

All the Celtics’ shortcomings were rendered irrelevant when Jeff Green caught the ball with 0.6 seconds on the clock and drained a game-winning 3-pointer as time expired to lift the Celtics to a 111-110 victory over the Heat. It was the perfect punctuation to one of Green’s most solid offensive performances since he came to Boston in 2011. It was also fitting that Gerald Wallace and Olynyk, who have had rough starts to their first seasons with the Celtics, played major roles in making the play happen.

“Gerald made a great pass, Kelly set a great screen, I was able to get a great look and it went in,” Green said. “I was shooting well [Saturday] night, so I wanted the ball and Gerald found me.”

Green finished with 24 points on 8-for-16 shooting, including 5-of-8 from beyond the arc and 3-for-5 at the foul line. Unlike Friday’s win, in which the Celtics made a series of mistakes down the stretch that would have resulted in a loss to any team better than the Magic, the Celtics deserved to win in Miami. Their offensive execution was as crisp as it has been and their defensive effort was light years ahead of the Heat, who looked disinterested in matching the Celtics’ intensity on that end of the floor.

Nine times out of 10, the Heat probably beat these Celtics, especially if the Heat are actually motivated. And, sure, this victory may have hurt the Celtics’ draft plans, since they now sit just one win away from a .500 record.

If that’s your position, fine. If you honestly believe one thrilling victory in November is a make-or-break moment in the race for Andrew Wiggins, you’re entitled to your asininity. But with one improbable buzzer-beater, Green delivered a message to Celtics fans:

At Butler, that game would have been over. This might have been Celtics coach Brad Stevens‘ greatest takeaway after Green’s ridiculous shot on Saturday.

“It’s proof that in this game, with all the ability to advance the ball, that if you score quick, you’re going to have a chance to at least shoot it if they miss free throws,” Stevens said. “We had a chance. It was a great shot by Jeff but it’s fortunate to even get a shot off in that moment.”

The Celtics were dead to rights with 0.6 seconds remaining when they fouled Dwyane Wade to send him to the line with Miami leading 110-108. One make and the Heat were guaranteed overtime, at worst. But Wade missed the first free throw and opted to intentionally miss the second free throw, which wasn’t the worst idea in the world.

What was the worst was Wade’s apparent ignorance of the rules. Instead of bouncing the ball off the rim, Wade gunned the ball at the backboard — a clear violation of the rule (at every single level of organized basketball) that a free throw must hit the rim. Rather than assure Miami victory, Wade’s miss gave the Celtics new life.

Following a timeout and beautifully drawn up play by Stevens, the Celtics capitalized.

“It is remarkable,” Stevens said. “In college, that game’s over. You have to go the length of the floor in point-six. That means you have to catch, turn and shoot, and that’s almost impossible. In this, you have a chance to catch it facing the basket and with 0.4 or more, you’ve got a shot.”

At one point in the third quarter, when the Celtics were lugging the Heat through the muck along with them in classic Celtics-Heat style, the five players on the floor for Boston did not seem to fit together. Wallace, Green and Olynyk were paired with Jordan Crawford and Avery Bradley in a unit that featured no post defender or true post-up offensive player.

Weird lineups like those were a theme of the night as Stevens threw every wrinkle at the Heat. Miami coach Erik Spoelstra has gone with some strange groupings before, but at least his “small” lineup includes a strong defensive center in Chris Bosh and the massive, position-less James.

Whatever Stevens has thinking with some of his personnel combinations, it worked. At intervals, the Heat had all sorts of trouble guarding players like Courtney Lee and Kris Humphries, guys who normally should not give the Heat any trouble as individual matchups. It was almost like Stevens was back at Butler, out-thinking more talented squads and stealing wins while the top-ranked teams stood there with their mouths agape.

Then again, maybe everyone should have seen this coming. Beating great teams despite being overmatched in talent has been Stevens’ M.O. for years. He had one shot at the best team in the land and he took it — although chances are Stevens still would rather take a Gordon Hayward half-court shot over Green’s fadeaway from the corner if you hooked him up to a lie-detector test. 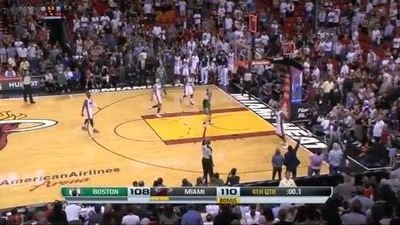