Bronson Arroyo is having a hard time wrapping his head around this offseason.

Arroyo, who remains a free agent despite stringing together 10 consecutive seasons of at least 32 starts, is frustrated with his lack of contract offers, according to ESPN’s Jayson Stark. Arroyo’s frustration intensified when the New York Yankees threw $155 million at Japanese pitcher Masahiro Tanaka, who has yet to throw a single pitch in the majors.

“I get [Clayton] Kershaw [signing a seven-year, $215 million deal],” Arroyo told ESPN.com. “I get why he got all that money. But then you’ve got guys like Dice-K [Matsuzaka], who came over here and was good for the first couple years but then didn’t pan out. And when he doesn’t pan out, they all just forget and go on to the next guy who’s not proven, and pay him.

“Meanwhile, they forget about guys like me, who have done the job for the last eight or 10 years, and treat them like they’ve never done anything in this game. That’s hard, man.”

Arroyo, while certainly not an ace, has been a very reliable starter for the better part of a decade. Only Arroyo and Mark Buehrle have pitched at least 199 innings each of the last nine seasons, and only CC Sabathia and Dan Haren have thrown more total innings than Arroyo in that span. Arroyo is tied with Haren for the most starts since 2005 with 297.

“I don’t know what to do,” Arroyo said. “I’m not trying to break the bank. But I am a guy who’s performed for the last 10 years as consistently as anybody in the game. And for some reason, nobody’s thrown me an offer yet.”

Arroyo told ESPN.com that 12 teams have contacted his agent, Terry Bross, but the 36-year-old hasn’t come close to signing a deal. Arroyo reportedly was seeking a three-year contract in the $30 million range, although Stark reports that one executive believes the right-hander ultimately will land a two-year deal with a third-year option.

“I know, eventually, it’ll get done,” Arroyo said regarding a deal. “There are too many holes in too many rotations, and there aren’t enough pitchers out there who can throw you 200 innings. So I’m just sitting here waiting for an offer.”

The waiting game, clearly, can be a frustrating one to play, especially when your track record is as impressive as Arroyo’s.

Patriots Trading For Larry Fitzgerald More Plausible Than It Sounds 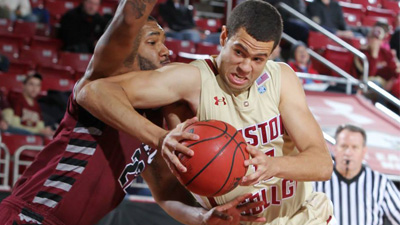 Boston College Still Unable To Climb Out Of ACC Basement