Lionel Messi is back to doing what he does best — scoring ridiculous goals against Getafe and making it look easy.

Messi scored both goals in FC Barcelona’s 2-1 victory over Getafe in the Copa del Rey (Spanish Cup) on Tuesday. His second, a solo goal that can only be described as “classic Messi,” was a thing of beauty.

In the 64th minute, Messi dribbled past four defenders and around Getafe goalkeeper Jordi Codina before calmly slotting the ball into the goal from a tight angle.

After missing two months of action due to a torn hamstring, Messi returned to the field last week. He came off the bench and scored two goals (in 27 minutes) against Getafe to help his team win the first leg. Messi scored another pair Tuesday, including the awe-inspiring second.

The goal is reminiscent of the one Messi scored against Getafe back in 2007, which is often cited as his greatest-ever. Messi scored after a mazy dribble against the same team in the same stadium (Getafe’s Coliseum Alfonso Perez) as yesteryear, but there was a new crop of defenders for him to terrorize this time.

Messi was a 19-year-old phenom back then. Now, he is a 26-year-old veteran who is one of the world’s top two players of the moment, and he’s certainly one of the best to ever play the sport. Goals like these make it easy to see why that’s the case.

See Messi’s most recent solo goal against Getafe in the video below.

See Messi’s 2007 goal against Getafe in the video below. 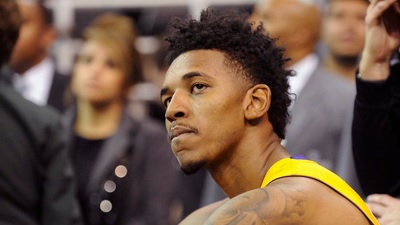