FOXBORO, Mass. — Devin McCourty has a tall order in front of him in 2014 as a New England Patriots defensive captain.

McCourty could be the only starting defensive back who played for the Patriots in 2013 to play in Week 5, when the Patriots face the Cincinnati Bengals. Newly acquired cornerback Brandon Browner will be back from his four-game suspension, and if all goes as planned during the summer, he and Darrelle Revis will be New England’s starting cornerbacks in 2014. Since last year’s starting strong safety Steve Gregory was released this offseason, the Patriots will have a new starter playing next to McCourty next season, as well.

Aqib Talib has left for Denver, and the Revis and Browner signings likely will push Alfonzo Dennard and Logan Ryan into reduced roles. The Patriots’ secondary had a strong rapport last season — in the locker room and on the field — but there are some new faces for the old guard to get acquainted with this year.

“As a secondary, the bonding begins now,” McCourty said Thursday at Gillette Stadium about the offseason workout program. “You know, you guys always saw us in the locker room, we’re always in there laughing and joking — that starts now. A group of us is always working out together, we’re running together, we’re in the locker room together. The bonding, as a secondary, as a unit, starts now. The good thing is that everybody’s all in. We’re all in to have fun and be better together as a unit.”

Second-year Rutgers product Duron Harmon is penciled in as the starter next to McCourty at safety, but he’ll have some competition for the role. The Patriots reportedly are considering moving Ryan from cornerback to safety, and the team recently re-signed familiar face Patrick Chung, back from spending one year with the Philadelphia Eagles. The Patriots also could address safety in the early rounds of the 2014 NFL draft.

The Patriots’ secondary is suddenly stacked, but they’ll need to get used to playing together during the summer.

“You never know,” McCourty said about how long it takes for a secondary to jell. “I think the biggest thing is getting out there (on the field). Once you get out there, you start getting a feel for each other. They’ll have some things they’re used to doing that will feel familiar and there will be some new things.”

It seems simple to bring in two top players like Revis and Browner, with the theory being that they’ll just man up with an opposing wide receiver and the rest of the defense will focus on the other opposing players. But the strength of the Patriots’ defense in the past has been in its complexity, and even if Revis’ job is to track a receiver down the field, he’ll still have to work together with the rest of his defensive backs.

It’s up to McCourty, who’s been with the Patriots since 2010, and the coaches to make it all come together this season. 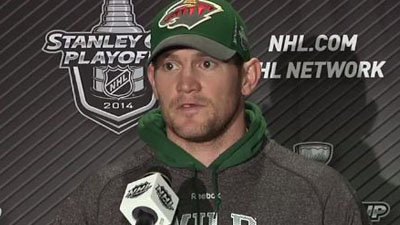 Matt Cooke: Knee-To-Knee Hit On Tyson Barrie ‘Was Not My Intent’