When BroBible.com leaked an alleged New England Patriots scouting report on Johnny Manziel, which bashed his work ethic and personal life, many news outlets were skeptical of its veracity.

Belichick was asked about the report during a Friday news conference that followed the second day of the NFL draft, and he went above and beyond his standard non-answer to give a response that bordered on nonsense.

?With all due respect, I hate to admit this, but I don?t think I?ve been online in a couple days or weeks or whatever, so that?s not really an important thing to me,? Belichick said. ?I don?t even know what?s online and what isn?t online. But I would say we probably have, I can?t even imagine, 10,000 pages of information. It?s a lot of information.

“There?s no way I can sit up here and tell you that I?ve read it all. I?ve read a fraction of it. But we have a ton of information on all the players that are in the draft. What?s online, you should go talk to the geniuses that are online. I don?t know. MyFace, YourFace, InstantFace. Go talk to whoever you want that does that stuff. I don?t know.?

Belichick couldn’t hold back his signature smirk while delivering that gem of an answer and clearly was having fun with the reporters, so we’re probably not going to receive a much better response than that.

That, along with the fact that it’s genuinely impossible to tell whether or not the report is real based on looks alone (though Bro Bible does point out it has the old Patriots logo on it), puts this one in the books. 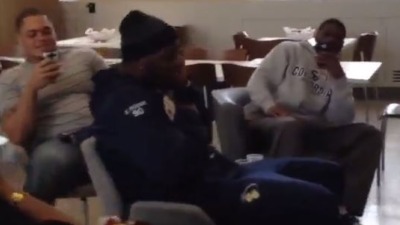