Neither Real Madrid nor Atletico Madrid will ever forget the wild ride that was the 2013-14 UEFA Champions League final.

Two cars began their journey from Madrid to Lisbon at the end of April. They arrived at the Estádio da Luz (Stadium of Light) on Saturday, where their epic sprint for continental glory began in earnest.

Atletico Madrid played like it normally does, using its controlled aggression and incredible focus to stymie one of European soccer’s most fearsome attacking forces. For nearly an hour, it looked like those upstarts from the wrong side of tracks in Spain’s capital city would prevail. Then, the unthinkable happened. Atletico’s Madrid ran out of gas at the exact moment Real Madrid put the gas pedal to the floor — 90 seconds before the end of the game.

Sergio Ramos tied the game with a dramatic goal in second-half stoppage time. Atletico Madrid never recovered from the setback, and Gareth Bale’s 110th-minute goal gave Real Madrid its first European championship in 12 years and 10th in it’s rich history. Marcelo and Cristiano Ronaldo completed the late flurry with two more goals — the proverbial one-fingered salute to their opponents who had faded into the distance in Real Madrid’s rear-view mirror.

Atletico Madrid was without wing wizard Arda Turan from the start, and star striker Diego Costa limped off after nine minutes with a hamstring injury. Raul Garcia and Adrian Lopez gave honest efforts in their absences, but Atletico Madrid never posed much of a threat from open play. Would that have been the case had Costa and Turan played? Probably not.

As expected, the game was tense and competitive, but the substitutions tell the story of the minute difference between the teams on this day. Real Madrid inserted Marcelo (the starting left back on Brazil’s national team), Isco (a ?30 million/$50.5 million summer signing and one of Spain’s brightest prospects) and homegrown striker Alvaro Morata, who boosted his team after replacing Benzema.

Atletico Madrid turned to Lopez, Jose Sosa and Toby Alderweireld, who failed to prevent Bale from heading in the winning goal at the far post. That’s the same Bale who joined Real Madrid from Tottenham Hotspur in an eye-popping transfer worth ?91 million ($123 million, £78 million) last summer.

Diego Simeone was sent off for his role in a minor fracas after Ronaldo’s goal. The passion of the Atletico Madrid had driven his team to this point, but they were out of fuel. True to form, the Argentine hopped out of the vehicle and pushed it over the finish line. Unfortunately, Real Madrid’s luxury sedan had already arrived, and Los Blancos were busy celebrating their greatest-ever victory over their less heralded neighbors.

Review our live blog of the 2014 Champions League final>> 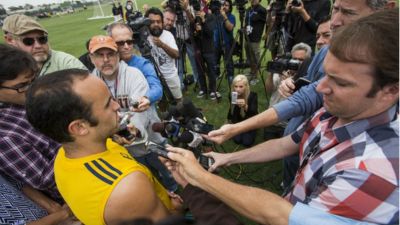