Albert Ebosse scored the last goal of his life on Saturday.

Ebosse, 24, died on Saturday after he was struck in the head by a rock thrown by fans of his own team, Algerian club JS Kabylie, the BBC reports.

The tragedy occurred at the 1st November Stadium in Tizi Ouzou province following Kabylie’s 2-1 loss to USM Algiers in the Algerian league. Ebosse scored his team’s lone goal — from the penalty spot.

Ebosse and his teammates were walking off the field toward the dressing room when angry Kbylie fans started throwing stones and other projectiles onto the field. One of them hit Ebosse, causing a head injury. Ebosse was rushed to a local hospital, where he was pronounced dead.

Issa Hayatou, the president of the Confederation of African Football, condemned the violence.

“My thoughts go out to the family and friends of this young man who enjoyed his job peacefully and went further to pursue his passion for football abroad,” Hayatou said in a statement, according to CAFonline.

“African football cannot be the breeding ground for hooliganism whatsoever. We expect exemplary sanctions to be taken against this grave act of violence. Violence has no place in African football in particular and sports in general. We remain resolute and state in the strongest terms our determination to eradicate all forms of violence and unsportsmanlike conduct in stadiums on the continent. ”

Algerian security services are investigating the tragedy, and the stadium has been closed until further notice. 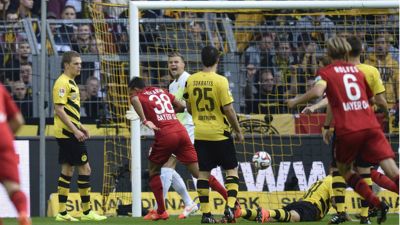