FOXBORO, Mass. — New England Patriots fans were exposed to some ugly football in Thursday night’s preseason loss to the Washington Redskins, so it’s natural that they have attached themselves to one of the game’s few shining stars — wide receiver Brian Tyms.

New Englanders have clamored for a deep-threat wide receiver since Randy Moss was traded to the Minnesota Vikings midway through the 2010 season, and Tyms showed glimpses that he might be able to stretch the field in the NFL with his five-catch, 119-yard performance and 4.48-second 40-yard dash speed. If Tyms reminded fans of Moss, there’s good reason — the first-year pro is a disciple of the Rand, W.V., native.

“Yeah, that’s my favorite player,” Tyms said Sunday at Gillette Stadium after training camp of Moss. “That’s kind of the reason I signed (with the San Francisco 49ers) out of college. That was my favorite player, I wanted to learn everything I could from him. He’s a really good guy. He taught me a lot as far as deep ball, and everything like that.”

The 6-foot-3, 204-pound receiver spent nearly four months learning from Moss before the 49ers released Tyms, and he latched on with the Miami Dolphins before the 2012 season. Tyms has bounced around the league since his rookie season, but he’s opened some eyes with his performance this summer in New England.

The Patriots have a crowded group of wide receivers, but Tyms could be afforded an extra four weeks of cushion to make the 53-man roster because of an unfortunate circumstance. Tyms will start the season with a four-game suspension after testing positive for Adderall, an ADHD medication for which Tyms had a prescription that he failed to clear with the NFL.

Tyms doesn’t spend much time thinking about the four-game ban, because he’s too busy concentrating on what it will take to crack the Patriots’ 53-man roster.

“Sometimes I think about it, sometimes I don’t,” Tyms said. “I don’t know if you guys feel the atmosphere coming out here, but any time we come out on the practice field, everybody’s serious. … I don’t really have time to sit back and worry about, ‘Ah, man. I’m missing the first four games.’ I can’t do that. Because the moment I do that is when, ‘Hey, Brian, sub in.’ And I’m in there with Tom (Brady) and Tom calls a play and I don’t know what I’m doing because I’m thinking about a suspension.”

Tyms took a moment to appreciate being in the same huddle as Brady on Sunday early in practice. The wide receiver had a tough journey to the NFL, which included living in foster homes and sleeping in his car, and playing with Brady has been an eye-opening experience.

“Today I did,” Tyms said when asked if he ever has to pinch himself about playing with Brady. “I mean at first, after walkthrough I was kind of like staring at him, like, ‘I’m actually in the huddle with Tom Brady.’ As a kid you’d play with him on video games, like ‘Oh, I got Tom Brady, you can’t stop me.’ I’m out here, I’m hearing Tom call the plays and I’m just kind of in awe. Like, man, this is Tom Brady, man. As a football player, as a professional, you’ve got to bottle that in and just play, because he expects you to know what you’re going to do, and to move at his tempo and to make plays.”

Tyms still is a long shot to make the Patriots’ roster, but a few more performances like Thursday night’s could convince the Patriots to give the journeyman a shot. If he can make it through training camp, the Patriots can store him for four weeks on their suspended list for free. 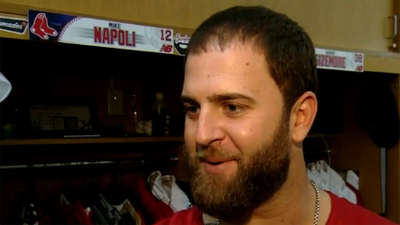 Mike Napoli, Shawn Thornton To Strut Their Stuff At ‘Rescue The Runway’