Bill Belichick wasn’t going to trade Ryan Mallett until he knew the New England Patriots had a better backup quarterback to fill his void.

The Patriots probably could have received higher compensation for Mallett than the conditional seventh-round draft pick the Houston Texans reportedly gave up in a trade Sunday, but Belichick didn’t want to be left with Brian Hoyer as a backup or — even worse — Tim Tebow. So the Patriots head coach waited until rookie Jimmy Garoppolo proved himself to unload Mallett on his former offensive coordinator, Bill O’Brien.

Belichick talked about the importance of having a quality backup quarterback — and took a veiled shot at the Indianapolis Colts — in May after the Patriots drafted Garoppolo in the second round.

“I think organizationally, in our organization I don?t think we would put together a team the way Indianapolis did it when they lost (Peyton) Manning and they go 0-16, 1-15 or whatever it was (2-14),” Belichick said at the time. “I don?t think that?s really what we?re looking for.

“Unfortunately when we lost Tom (Brady) in 2008 — we had a player that could step in (Matt Cassel) and we won 11 games. We want to be competitive even if something happens to a player at any position. I think depth is always important. You never know when you?re going to need it. But I don?t think we?d be happy going 1-15 if we had an injury at one position.”

The Patriots obviously felt more comfortable with Garoppolo than Mallett as Brady’s backup. Garoppolo struggled at the onset of training camp, but his play heated up as he was able to gain confidence. Garoppolo played in all four quarters of the Patriots’ preseason finale against the New York Giants, and although his play was shaky at times, he was better than Mallett, who always has been inconsistent during the summer.

The Patriots likely envisioned in 2011 that the payoff for taking Mallett in the third round of that year’s draft would have been higher. He would have garnered a first- or second-round pick in an ideal world, or he would have been Brady’s successor, but some draft picks don’t work out as expected, and the Patriots are fortunate to cut their losses and acquire something in return for a backup quarterback who has little regular-season experience.

Mallett has a big arm and an impressive pedigree, but he wasn’t able to put it all together in New England. Now the pressure is on the fourth-year pro as he finally has a chance to earn a starting role in Houston.

David Ortiz Benefiting From Yoenis Cespedes: ‘He Makes Everybody Better’ 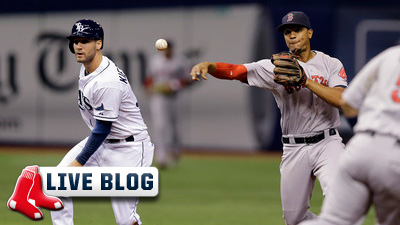