BOSTON — The Red Sox?s starting rotation isn?t etched in stone. But the stencil is in place.

Red Sox general manager Ben Cherington indicated Thursday that he likely has done most of his heavy lifting with regards to the club?s pitching staff. Changes still could be made, but one shouldn?t expect Boston to acquire James Shields, Cole Hamels or some other big-name starter before Opening Day.

“All I can say right now is, as far as the starters are concerned, we’re really focused on the guys we have,” Cherington said before the annual Boston Baseball Writers Dinner. “We’re pursuing some opportunities maybe on some depth in certain areas, but there’s nothing on the front burner that would grab headlines.”

The Red Sox already added three starters — Rick Porcello, Wade Miley and Justin Masterson — this offseason, so it isn?t as if Boston sat on its hands. There?s been plenty of speculation that the Sox could go after a top-flight starter, though, especially after losing out on Jon Lester, who signed a six-year, $155 million contract with the Chicago Cubs.

“The free-agent market has been pricey this winter, obviously,” Cherington said. “Starting pitchers who perform at the highest level and do so consistently and are relatively young or near their primes, those guys are hard guys to get and they’re valuable and they cost a lot, whether it’s dollars or talent.

“We’re trying to put ourselves in a position where we have that kind of caliber pitching, and hopefully we have some of it internally. There’s no question the team benefits from having high-end starting pitching performances. It’s just the question of what’s the best way to get it.?

If the Red Sox began their season Thursday, the rotation likely would be comprised of (in no particular order) Porcello, Miley, Masterson, Clay Buchholz and Joe Kelly. There?s plenty of potential within the unit, but it?s reasonable to question whether there?s enough talent to adequately supplement what should be an improved Red Sox offense in 2015.

The Red Sox are fortunate enough to have a wave of intriguing young starting pitchers, though most have minimal major league experience or are on the cusp of reaching The Show. Those hurlers could become valuable contributors in 2015, and the Red Sox thus are focused on ?depth-related? acquisitions at the moment.

?We like where we?re at. We like the collection of pitchers we have,? Cherington said. ?We think there?s untapped potential in the group, and the collection we have now can give us a strong pitching staff this year.?

It might soon be time to break out the chisel. 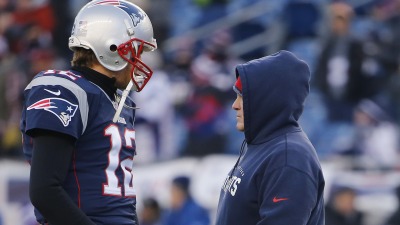 D’Qwell Jackson: Patriots Were Using Colts Footballs At End Of First Half