John Harbaugh's Issue With Patriots' Four-OL Set Should Be With Refs - NESN.com Skip to content

Baltimore Ravens head coach John Harbaugh took issue with Belichick using “deception” in the four-lineman set. Harbaugh needs to have a word with NFL officials, however.

The Patriots made running back Shane Vereen ineligible on two plays and tight end Michael Hoomanawanui ineligible on one during their second drive of the third quarter. The ineligible players couldn’t cross the line of scrimmage on a passing play, nor could they catch a forward pass.

NFL officials announced “No. 34 Shane Vereen is ineligble. Do not cover No. 34.” The officials led the Ravens astray.

Vereen and Hoomanawanui couldn’t run a route or catch a forward pass, but nothing in the NFL rules states that they couldn’t catch a backward pass from quarterback Tom Brady. An NFL spokesperson confirmed that Brady was allowed to throw a backward pass to an ineligible receiver.

It appeared that the Patriots were well aware of this.

Watch Vereen, lined up in the slot at the bottom of the screen, on the Patriots’ first “ineligible” play. As soon as the ball is snapped, Vereen runs backward and puts his hands up.

Vereen pulls a similar move in the Patriots’ second “ineligible” play, but he’s actually not the ineligible receiver. Hoomanamaui was announced as ineligble and just stands at the line. The Patriots were throwing deception on top of deception. Does that make it inception?

Vereen again runs backward on the Patriots’ third “ineligible” play and throws his hands up, expecting a possible pass from Brady.

The Patriots never threw to an ineligible receiver, but they could have. Given Harbaugh’s reaction to the alignment, he might have had a full-on conniption if they had.

As NESN’s Matt Chatham astutely pointed out, all the Ravens really needed to do was drop back in a Cover 2. Of course, it would have helped if the officials hadn’t announced that the ineligible players shouldn’t be covered. That seems like the job of a coach, not a ref, especially because it wasn’t true. 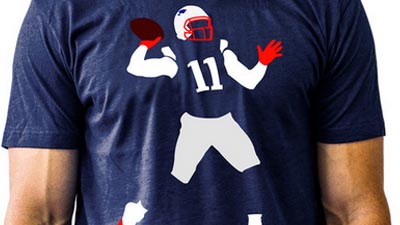 Report: John Fox Could Be Fired As Head Coach If Broncos Lose To Colts