The second half of Super Bowl XLIX was a tale of two drastically different quarters for the New England Patriots.

The Patriots allowed the Seattle Seahawks to go on a 10-0 run in the third quarter before finishing with 14 unanswered points and a fourth Super Bowl title.

Quarterback Tom Brady completed just four of eight passing attempts for 27 yards with an interception in the third quarter. Then he finished strong, going 13 of 15 with 124 yards with two touchdowns in the fourth quarter.

Check out the Patriots-Seahawks first half film review here.

Now we’re on to the second half:

QUARTERBACK
Brady carved through the Seahawks’ vaunted defense in the fourth quarter after struggling earlier in the half. Brady tried to force a pass to tight end Rob Gronkowski midway through the third quarter, but Seahawks linebacker Bobby Wagner made a great play on the ball and picked it off.

Brady showed off his somehow-improving mobility on the Patriots’ first scoring drive of the fourth quarter, stepping up in the pocket twice to hit wide receiver Julian Edelman on deep in routes.

Brady waited for the Seahawks’ defensive ends to loop behind him, and for his interior offensive line to create a lane. Brady then stepped up in the pocket and fired two strikes to Edelman, who got absolutely nailed on the first catch:

The Patriots’ go-ahead touchdown play call was identical to one they ran in the red zone on the previous drive. Brady overthrew Edelman on the first one (then hit receiver Danny Amendola for a touchdown on the next play). The Patriots ran the play perfectly the second time to go up 28-24.

From watching mic’d up segments, the Seahawks defense knew this play was coming before the Patriots ran it, but Edelman’s cut on the return route was so impressive that cornerback Tharold Simon still couldn’t stop it:

RUNNING BACKS
The Patriots basically stopped running in the second half, picking up just 12 yards on 9 carries. Shane Vereen continued to be a big part of the passing game, however, as he caught four passes for 22 yards in the final quarter.

Vereen made an incredible one-handed snag on the play below. It’s unclear if Brady was even targeting his running back, or Edelman, who was positioned behind Vereen:

WIDE RECEIVERS
Edelman continued to tear it up in the second half, catching six passes for 68 yards and a touchdown. For more on his hard-nosed performance, click here.

Amendola was Brady’s second read on the Patriots’ first touchdown of the second half. Brady initially looked to wide receiver Brandon LaFell, who took three defenders with him to the front of the end zone. That left Amendola with just Earl Thomas in coverage, and Brady’s throw went to the perfect spot where the Seahawks safety couldn’t get to it:

Gronkowski, lined up in line on the bottom of the screen, simply beat Chancellor off the line on a slant.

OFFENSIVE LINE
The offensive line had trouble opening holes for the Seahawks, and they continued to be plagued by defensive end Michael Bennett.

The offensive line allowed nine pressures, including a sack in the second half, despite Brady getting ride of the ball quickly.

DEFENSIVE LINE
After running back Marshawn Lynch gained just 45 yards on the ground in the first half, the All-Pro had a more successful second half, picking up 57 yards on 12 carries.

Ninkovich stunted and was stonewalled by right guard J.R. Sweezy. Then he looped around again to bring down Wilson. It helped that the Patriots’ secondary was able to maintain blanket coverage for four seconds:

LINEBACKERS
Linebacker Dont’a Hightower played with a torn labrum in his shoulder, but he maintained a high level of play. The 270-pound linebacker made a game-saving tackle late in the fourth quarter, as the Seahawks were attempting to score from the 5-yard line.

Hightower tripped up Lynch 1 yard shy of the end zone:

Safety Patrick Chung ate up fullback Will Tukuafu’s lead block, Hightower went low, and defensive end Akeem Ayers cleaned up by landing on top of Lynch. If Hightower tried to form tackle Lynch, he could have been barreled forward for the score.

CORNERBACKS
Malcolm Butler made the game-winning interception, but his high level of play started well before he sniffed out a pick route on the 1-yard line.

Butler entered the game for cornerback Kyle Arrington, who had struggled to cover tall receiver Chris Matthews, with eight minutes left in the third quarter.

Butler’s first impact play actually came against the run, when he stuffed Lynch.

Butler is one of the smallest players on the Patriots’ roster, and he helped stop Lynch for just 3 yards.

Butler’s first target was just a 6-yard reception by Kearse. Butler did a nice job preventing Kearse from gaining yards after the catch with an open-field tackle.

Butler knocked the ball away from Kearse on Wilson’s next target to the undrafted cornerback. Patriots cornerbacks are instructed to hit a receiver’s arm, which Butler did perfectly here:

Butler got away with pass interference when receiver Ricardo Lockette beat him on his next target. Lockette got separation, and Butler fell and reached out to trip Lockette. Wilson’s pass fell incomplete.

Butler was lined up in the slot on his next target, where he tracked Kearse perfectly. Butler high points the ball and knocks Wilson’s pass away.

Butler made an incredible play on his next target, but unfortunate luck made the football bounce right back into Kearse’s arms as the receiver was on his back.

Butler again high-pointed Wilson’s pass and got his hand on the ball while covering Kearse, who had two inches on the defensive back. It was by no fault of Butler’s that the ball landed in Kearse’s arms:

Butler’s next play, of course, was the game-winner. It was incredible how quickly Butler was able to cover ground on the play. Here’s what Wilson saw when he started to throw: Butler sniffed out the play perfectly, but plenty of credit goes to the 6-foot-4, 221-pound Browner, who prevented Kearse from accomplishing his intended pick on Butler.

Butler took a risk by heading straight for where he thought receiver Ricardo Lockette was heading, but in that circumstance, it was the perfect play. The Patriots needed that interception, and the cornerback that his teammates call “Strap” came through at the ideal time:

Darrelle Revis allowed just one catch on one target, and umpire Bill Shuster did what Kearse couldn’t by picking the All-Pro cornerback.

Doug Baldwin ran Revis into Shuster, which freed the receiver to get a touchdown:

SAFETIES
Chung and Devin McCourty continued to blank Seahawks tight ends, who weren’t even get targeted in the Super Bowl.

McCourty was slightly late covering the deep part of the field when Arrington allowed a 45-yard catch to Matthews at the beginning of the third quarter. 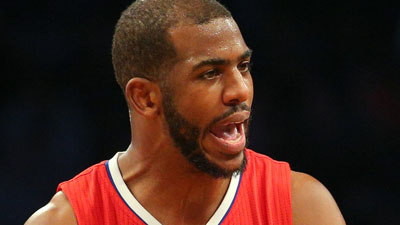 Chris Paul Gets Heat For Ripping Female Ref, Says ‘This Might Not Be For Her’ 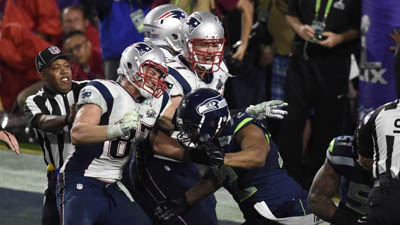