“Hey, dad! Who was the guy who played for the Celtics they called the best sixth man in basketball?”

That exchange between Bud and Al Bundy on the sitcom “Married … With Children” constitutes the greatest and perhaps only moment in which Frank Ramsey and pop culture ever intertwined. Despite winning seven NBA championships with the Celtics and earning basketball’s original “Kentucky Colonel” moniker, the father of Boston’s great sixth-man history is largely overlooked today.

He wasn’t the razzle-dazzle showman like Bob Cousy, the noble keystone like Bill Russell or the celebrated shot-maker like Bill Sharman or Sam Jones. Ramsey was the Celtics’ leading playoff scorer in their 1959 run to their second title, but if you asked Celtics fans for whom the No. 23 jersey hangs from the rafters at TD Garden, many would be at a loss.

Yet with Ramsey’s alma mater, the University of Kentucky, currently charging toward a potential undefeated season, it’s worth remembering he once played a key role on another undefeated Wildcats squad. Except Ramsey’s team went undefeated under much weirder circumstances, and the magnitude of the accomplishment might be more debatable than it would be if John Calipari’s club cuts down the nets in Indianapolis.

Adolph Rupp is most known for a couple of things nowadays: for being UK’s all-time pacesetter in coaching victories and national championships, and for having an at best ambivalent attitude toward integrating major college basketball. But he also presided over the curious case that was the 1953-54 Kentucky team that went 25-0 but did not win an NCAA or NIT title.

Without exhausting the specifics, suffice it to say Rupp’s tenure in Lexington, Ky., was just as complicated as Calipari’s polarizing coaching career. When the 1952-53 season was canceled because of a point-shaving scandal, three star players — Ramsey, Cliff Hagan and Lou Tsioropoulos — graduated. They returned the following season, running roughshod through Kentucky’s regular-season schedule, but the trio was banned from competing in postseason play.

Things worked out OK for the Wildcats in the long run — they made the tournament the next five years as No. 1 or No. 2 seeds and in 1958 won Rupp his fourth championship — but they never again went undefeated under Rupp or any coach since. The 1953-54 team has been largely forgotten except in infamy, which perhaps is fair, as they were never tested in the postseason.

As for Ramsey, the NBA’s first great sixth man should never be forgotten. While the best that can be said of his college coach’s attitude toward civil rights is, “it’s complicated,” Ramsey didn’t mince words. When the Celtics scheduled an exhibition game in Lexington in 1961, mainly intended to honor Ramsey in his home state, a controversy erupted after Russell and the Celtics’ black players were refused service at a local coffee shop. Russell, Satch Sanders, K.C. Jones and Sam Jones booked flights home, refusing to participate in the event in the segregated South.

Sports writers and fans criticized the players for sullying what should have been Ramsey’s night, claiming it was more important for Russell, Sanders and the Joneses to give their teammate his due than to take a political stand. But the man who was supposedly slighted didn’t see it that way.

“I was 100 percent behind Bill Russell and the other boys,” Ramsey said, as recounted in Aram Goudsouzian’s “King of the Court.” “No thinking man in Kentucky is a segregationist. I can’t tell you how sorry I am as a human being, a friend of the players involved, and as a resident of Kentucky for the embarrassment of the incident.”

Ramsey’s words would have reverberated in any age, but they spoke particularly loudly in 1961. At a time and in a place in which not everyone shared his opinion, Ramsey stood up for a friend and teammate under fire.

Weighed against that, any sort of undefeated season — debated or not — pales in comparison. 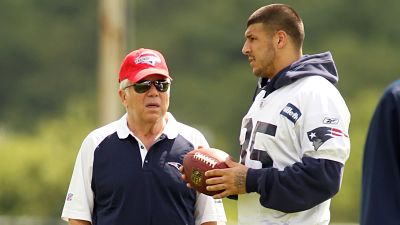 Robert Kraft: Aaron Hernandez Said He Was At A Club At Time Of Murder