It was nice of manager John Farrell to shoulder the blame for what he described as a ?terrible decision? in the Boston Red Sox?s walk-off loss to the Seattle Mariners.

But it wasn?t necessary.

While Farrell certainly pulled the wrong strings in the ninth inning of Friday?s 2-1 defeat at Safeco Field, the real issue plaguing the Red Sox is their inability to score runs. Boston?s lackluster offensive performance Friday was downright criminal given how well Clay Buchholz pitched for eight innings.

“Shoot, we had opportunities to score runs,” Red Sox second baseman Dustin Pedroia told reporters in Seattle after the loss. “That’s the way I look at it. Decisions at the end of the game — you can put those to rest at the beginning of the game. We had chances. It just didn’t go our way.?

Offensive futility has become a common theme for these Red Sox, who entered the season seemingly built on offense. Boston?s five-homer explosion on Opening Day, as well as the club?s opportunistic ways in the early going, is becoming a distant memory with each passing stinker.

This isn?t to say the Red Sox won?t break through. Heck, if/when they do, look out.

But with regard to a team whose starting rotation has been dragged through the mud in outside criticism, it?s time to face the reality that offense is as big an issue as any right now — even bigger than Farrell dropping the ball every now and then.

The Red Sox enter Saturday having scored just 19 runs over their last eight games. Only the New York Mets (33) have scored fewer runs than the Red Sox (34) this month — the Sox have played one more game — and Boston, unlike New York, doesn?t have the luxury of owning one of the best rotations in Major League Baseball.

Boston’s pitching staff, to its credit, has improved, albeit in a small sample, under the guidance of new pitching coach Carl Willis. It?s a truly remarkable plot twist, all things considered, but it?ll be for naught unless the Red Sox begin to strike some semblance of balance.

The Red Sox spent almost $200 million over the offseason to beef up their lineup in the hopes it would offset any pitching deficiencies that might crop up. Who knew then, and especially after a hot start, that it would be the offense not holding up its end of the bargain?

Again, this isn?t to be all doom and gloom. The Red Sox enter Saturday having won four of their last six on a very difficult 10-game road trip. It?s worth taking a bigger picture look at the matter, though, especially with Farrell taking the heat for what really boiled down to another dud by Boston?s bats. 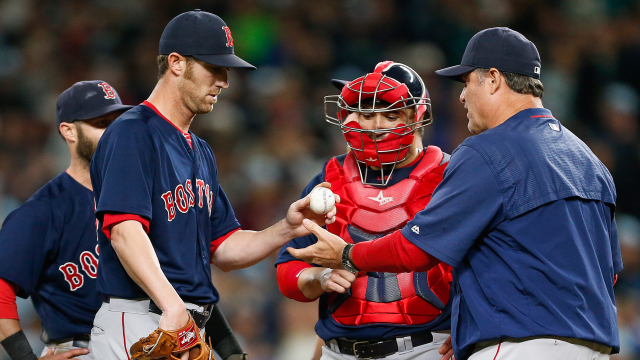