The 6-foot-6, 304-pounder was announced as an offensive lineman and given jersey No. 74 when the New England Patriots acquired him from the Detroit Lions for a 2017 seventh-round draft pick last Tuesday. That position and number lasted approximately two minutes.

Williams swapped his No. 74 jersey for No. 85 after warmups in his first practice with the Patriots, and he has been a tight end for the last six days, including Friday night’s game, when he was on the field for 24 snaps — 13 as a run blocker, seven as a receiver and four as a pass blocker, according to Pro Football Focus.

“No, and I still don’t,” Williams said when asked if he knew what position he’d play when he was dealt to the Patriots. “It’s more of seeing what I can do out there and trying to make the team.”

Running routes is nothing new for Williams, who played tight end at Alabama, catching 51 passes for 503 yards with seven touchdowns in four seasons, under head coach Nick Saban, a former Bill Belichick assistant.

The similarities in the way Saban and the Patriots head coach run their teams has been helpful as Williams tries to catch on quickly.

“Playing a game here, it was like a Sunday after a Saturday night game,” Williams said. “In my mind, it was like, ‘Wow, Saban took everything from Belichick and added his own things to it,’ but it was almost exactly the same process. That was helpful for me to know, basically somewhat of how the program is run. They do things differently, of course, but it’s very similar, I’ll say that.”

Two of Williams’ old college teammates, linebackers Dont’a Hightower and Xzavier Dickson, are not only helping the big blocker get acclimated, they’re also his co-chauffeurs.

Williams seems like a natural for a role Belichick has employed in his offense for the last several years: a tight end/sixth offensive line hybrid. Starting left tackle Nate Solder manned the position in his rookie season, and players like Marcus Cannon and Cameron Fleming recently have held it. Williams could be perfect for the position, since he has experience running routes and catching passes, and he played offensive line for the past two years with the Lions. If Williams keeps No. 85, he also wouldn’t be required to report as eligible when he enters a game, unlike an offensive lineman.

The big man isn’t worried about a specific position yet, however. 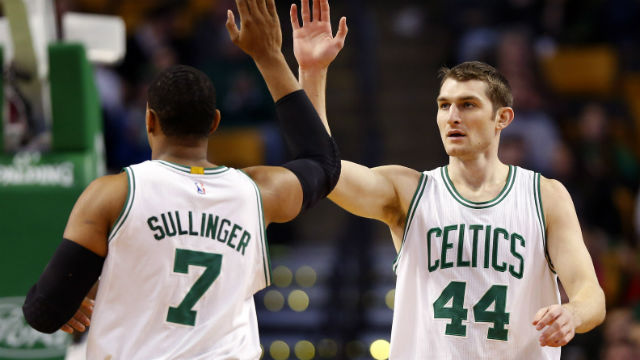