Your Tuesday probably paled in comparison to that of Ryan Goins.

The Toronto Blue Jays second baseman had one of the best games of his young career Tuesday night against the Cleveland Indians, playing the role of hero as the Blue Jays continued their torrid march toward the playoffs.

Goins’ heroics began in the second inning. Cleveland’s Lonnie Chisenhall got out in front of a pitch from Marco Estrada. The Indians infielder lifted the pitch down the right field line behind first base. Goins went sprinting back on the ball, which looked bound to fall in no man’s land. Somehow, Goins ran it down and made the sliding catch.

The Blue Jays led 3-2 heading into the ninth inning when the Tribe were able to tie the game. Goins came to the plate in the bottom of the ninth with a runner on and found the perfect way to extend his hitting streak to 11 games: He hit a walk-off home run.

MLB’s Statcast gave a very interesting look at the two plays, especially the catch, as it showed how far Goins really had to go to make the grab.

Goins is hitting a ridiculous .441 (15-for-34) during his current hitting streak and also has drawn five walks, giving him a .537 on-base percentage. The Blue Jays are 9-2 in those 11 games, and Toronto is 22-6 since the beginning of August.

Vince Wilfork Wears Overalls, Just About Nothing Else On ‘Hard Knocks’ (Videos) 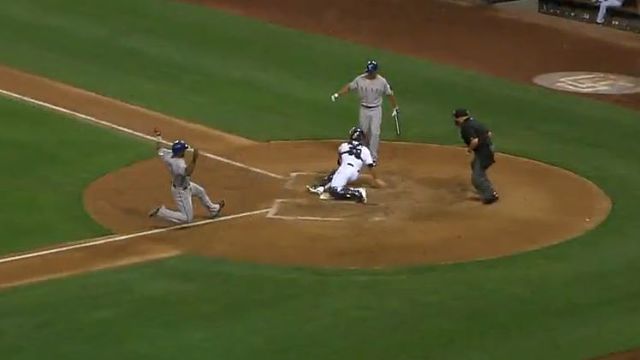