Eichelmania is off to a rousing start in Buffalo.

Jack Eichel, the Boston University product and North Chelmsford, Mass., native, made his much-anticipated debut Thursday night against the Ottawa Senators — and did not disappoint.

Eichel showed off his excellent shot in the third period when he sniped one past Senators goalie Craig Anderson for his first NHL career.

The Sabres lost 3-1, but there were plenty of positives for Sabres fans to cheer, including the play of Eichel, the No. 2 overall pick in this year’s NHL draft.

“It’s a pretty special moment for me,” Eichel said, via ESPN.com. “I’ll remember that for the rest of my life. Today is my dad’s birthday, I have a lot of family in town, so it’s a special moment to be able to score the first one today.

“A win definitely would have capped it off perfectly, but you can’t have it all, and it’s a long season.”

The other closely watched debut Thursday night came from Connor McDavid, the first overall pick in June’s draft by the Edmonton Oilers.

The former Erie Otters center has been labeled the best draft prospect ever by some experts, and even though he was held off the scoreboard with zero points and two shots in the Oilers’ 3-1 loss to the St. Louis Blues, he did show why there’s lots of reason for optimism in Edmonton. 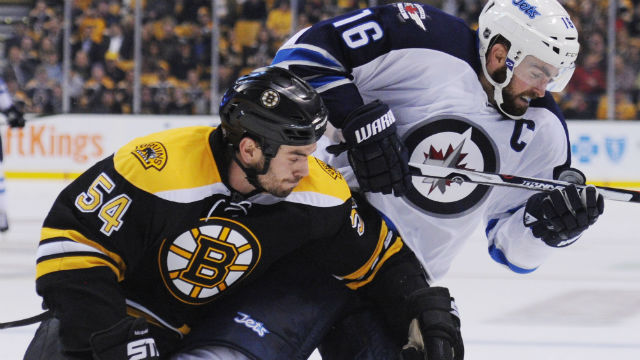 Bruins Notes: Jets Knock Off B’s In Boston For First Time Since 2007