The New England Patriots have a unique relationship with Tom Brady’s “body coach” Alex Guerrero, and that reportedly doesn’t sit well with the team’s training staff.

Guerrero landed in the spotlight for the wrong reasons in October when a Boston Magazine profile revealed the laundry list of legal issues the trainer has dealt with over claiming he was a medical doctor and falsely advertising various supplements. Brady has since stuck by him, and apparently, the Patriots have maintained a relationship with Guerrero that’s unlike any other in the NFL.

While most physical therapy practices pay big money to partner with NFL teams, a Boston Globe report Sunday revealed the Patriots have been paying for players to receive services at TB12 Sports Therapy Center, of which Guerrero and Brady are co-owners. The NFL and the NFL Players Association both told The Globe paying Brady’s company wasn’t against the collective bargaining agreement or salary cap rules, but it apparently has created a lot of tension with the team’s medical staff.

This is particularly true in regards to Brady’s 2008 knee injury.

“The Patriots medical and training staffs played vital roles in Brady?s recovery, particularly head trainer Jim Whalen and rehabilitation director Joe Van Allen,” The Globe’s Bob Hohler wrote. “But they have received far less public credit than Guerrero from Brady, and there remains tension between the Patriots staff and Guerrero.”

While former associates of Guerrero didn’t balk at his methods as a body coach — even Dr. Neal ElAttrache, who operated on Brady’s knee, said the athletes Guerrero worked with “have done very well?? — they questioned his merits as a business partner.

?I?ve seen Alex work as a massage therapist, and he?s impressive,?? Michael Howell, who joined Guerrero in a marketing enterprise that ended with federal sanctions against them, told Hohler. ?But as far as having him as a business partner or a friend in life, you?ve got the wrong guy.??

Still, the Patriots maintain their relationship with Guerrero despite complaints from their training staff.

“A source with direct knowledge of one such complaint recalled (head coach Bill) Belichick?s response: Tom wants him. What am I supposed to do?” Hohler wrote. 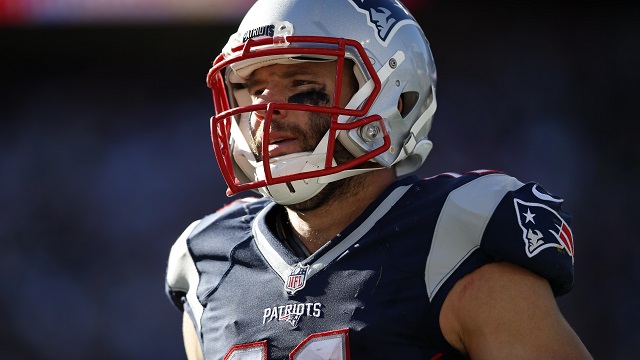 Report: Julian Edelman Could Return For Patriots In Week 17 Vs. Dolphins