Final — Patriots 27, Chiefs 20: The Patriots are on to the AFC Championship Game.

New England caught a huge break when Brady’s pass deflected off Tamba Hali’s hands and straight to Julian Edelman, who picked up the first down to seal the win.

Brady completed 28 of 42 passes for 302 yards, two touchdowns and zero interceptions, while Edelman led the Patriots in receiving with 10 catches for 100 yards.

The Patriots will await the winner of Sunday’s Denver Broncos-Pittsburgh Steelers game. They’ll travel to Denver if the Broncos win and play at Gillette Stadium if the Steelers win.

The Patriots have the ball at the Chiefs’ 44-yard line, but Kansas City has all three of its timeouts remaining.

Charcandrick West’s 1-yard rushing touchdown pulled Kansas City within one score, but the 16-play drive took five minutes and 16 seconds off the clock, forcing the Chiefs to rely on an onside kick attempt to keep their season alive.

Smith hit Jason Avant for a 13-yard pass on fourth down near midfield to breathe life into the drive and the Chiefs’ playoff hopes.

On the injury front, Jerod Mayo has been ruled out with a shoulder ailment.

The Patriots threw the ball three consecutive times and completed just one pass for six yards, going three-and-out and taking less than a minute off the clock.

Fourth quarter, 7:28, Patriots 27-13: The Patriots got another stop, and the Chiefs are running out of time.

Devin McCourty made the key defensive play of the drive, forcing an incompletion with a perfectly timed hit on wide receiver Chris Conley on 3rd and 10 from midfield.

Duron Harmon intercepted Alex Smith on fourth down but was ruled out of bounds, which actually was a break for the Patriots, since Smith’s pass traveled about 30 yards downfield.

Fourth quarter, 10:20, Patriots 27-13: The Patriots couldn’t take advantage of the short field and were forced to settle for a 32-yard field goal.

Brady found Keshawn Martin for a 15-yard completion on the first play of the drive, but his pass to Julian Edelman in the end zone on third down fell incomplete.

The Patriots forced a three-and-out from the Chiefs’ offense thanks to Chandler Jones’ 3-yard sack of Alex Smith on 3rd-and-10.

Fourth quarter, 14:46, Patriots 24-13: Stephen Gostkowski responded with a 40-yard field goal to make it a two-score game once again.

The key moment of New England’s eight-play, 57-yard drive was Brady finding James White down the left sideline for a huge 29-yard gain that moved the ball into Chiefs territory. The Patriots’ drive stalled at Kansas City 22-yard line after three consecutive incompletions, though.

Third quarter, 2:12, Patriots 21-13: We’re back to a one-score game after the Chiefs drove down the field and scored on a 10-yard pass from Alex Smith to Albert Wilson.

There were stretches of that drive when Collins, Hightower and Jerod Mayo all were out of the game, leaving Jonathan Freeny and Darius Fleming. Hightower returned. Collins is back on the bench, but Mayo departed for the locker room and is questionable to return with a shoulder injury.

Third quarter, 6:08, Patriots 21-6: Jamie Collins is questionable to return with a back injury.

Gronkowski has six catches on six targets for 81 yards and two touchdowns. What knee and back injuries?

Third quarter, 10:31, Patriots 14-6: The Chiefs were moving the ball well on the ground before Chandler Jones forced a fumble, recovered by Dont’a Hightower. The play was reviewed and confirmed.

Jamie Collins headed to the locker room earlier in the series.

End half, Patriots 14-6: The Patriots kneeled the ball to end the half.

Second quarter, 0:12, Patriots 14-6: The Chiefs probably wish they had some timeouts on that drive.

After getting inside the red zone, all they could do was continue to throw the ball, which was unsuccessful. They had to settle for a field goal, to cut the Patriots’ lead to 14-6.

The QB nearly scored on a 10-yard scramble on second and goal, then dove over the line after an unsuccessful challenge by the Patriots. Brady was seen running up and yelling at Patriots offensive coordinator Josh McDaniels as the two slapped hands and hugged it out.

The Patriots picked up big chunks of yardage on a 42-yard catch by Keshawn Martin and a roughing the passer penalty.

Second quarter, 8:59, Patriots 7-3: The Patriots forced their own three-and-out and now have the ball on their own 2-yard line. Danny Amendola was flagged for unnecessary roughness for clocking Chiefs corner Jamell Fleming while trying to down the punt.

Second quarter, 11:29, Patriots 7-3: So much for offense. The Patriots’ defense just forced a punt and now have the ball on their own 10-yard line after a fair catch by Danny Amendola.

Second quarter, 15:00, Patriots 7-3: The Patriots’ second drive didn’t go quite as hot. Brady has been a little off so far on short passes. Edelman and Danny Amendola also have had some ball clang off their hands and fingertips — catchable but not ideal passes.

The Patriots were forced to punt after picking up one first down. The Chiefs have the ball on their 33-yard line.

First quarter, 1:51, Patriots 7-3: That was a looooooooong drive. The Patriots allowed 64 yards on 17 plays and allowed four first downs on five third-down attempts. They finally got a stop on third and 6 at the 16-yard line. Cairo Santos knocked through a short field goal to cut the Patriots’ lead to 7-3.

Gronk had three catches for 43 yards, while Edelman had two receptions for 24 yards.

First quarter, 15:00: The Chiefs won the coin toss and chose to defer. The Patriots will receive the kickoff.

4:00 p.m.: Jeremy Maclin is moving at half-speed on his banged up leg.

Rob Gronkowski appears to be moving pretty well, though.

3:45 p.m.: Julian Edelman, Danny Amendola are catching punts in pregame warmups. Keshawn Martin and Matthew Slater are back for kicks.

Wouldn’t be shocked if we saw Martin on punt return duty today, however.

Here are the Chiefs’ inactives:

Morse and Duvernay-Tardif are starters for the Chiefs, who will be down to backups at center and right guard. Maclin is dealing with a high ankle sprain, so he could be limited for KC.

The Patriots have been without Edelman since Week 10. Patriots offensive tackle Sebastian Vollmer hurt his ankle in Week 16 but will presumably be back starting at left tackle. Hightower and Jones also are back after missing Week 17.

3:00 p.m.: The bye week did the Patriots good. All important injured players are active for the Patriots’ postseason opener.

All but Waddle and Jackson are healthy scratches.

2:40 p.m.: Chandler Jones is expected to start after having “his best week of practice ever,” according to Patriots radio color commentator Scott Zolak.

Haven't seen this in a while. Julian Edelman's pre game warmup. pic.twitter.com/EDnlV0lJum

The New England Patriots wide receiver has sat out with a broken foot since Week 10. If his pregame warmup is any indication, Edelman will do some damage against the Kansas City Chiefs on Saturday in the Patriots’ postseason opener.

The game kicks off at 4:35 p.m. here at Gillette Stadium.

Beyond Edelman’s health, there are plenty of storylines to watch this afternoon:

— Rob Gronkowski is banged up with knee and back injuries. He’s expected to play, but it remains to be seen how effective he’ll be.

— Chandler Jones embarrassed the team with a trip to the hospital after a reported bad reaction to synthetic marijuana. It’s possible head coach Bill Belichick could elect to sit Jones to start the game as punishment.

— The Patriots listed 12 players as questionable, including Edelman, Gronkowski, Jones (abdomen/toe), receiver Danny Amendola (knee), linebacker Dont’a Hightower (knee), defensive end Rob Ninkovich (shin) and offensive tackle Sebastian Vollmer (ankle). Those players are expected to gut it out, but we’ll find out for sure at 3:05 p.m.

Check out the forecast for today’s game: 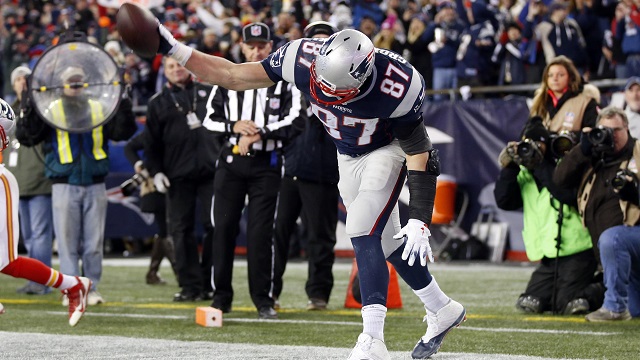 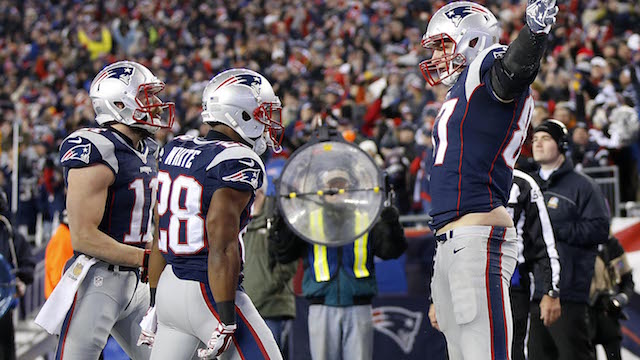