The Boston Celtics were one second away from righting their wrongs with an epic comeback.

The Celtics trailed the Milwaukee Bucks by 19 points entering the fourth quarter, but Jae Crowder’s 3-pointer with 23 seconds remaining tied the score to complete a remarkable turnaround. The teams traded points in the final seconds, but Avery Bradley fouled Khris Middleton after an inbounds pass with 0.6 seconds left, and the Bucks guard knocked down his first free throw to hand the Celtics a heartbreaking 112-111 loss at BMO Harris Bradley Center.

Crowder and Bradley each scored 18 points, while Isaiah Thomas and Kelly Olynyk added 15 apiece and Jonas Jerebko tallied 13. Greg Monroe was a monster for the Bucks, racking up a season-high 29 points and 12 rebounds to help Milwaukee snap a five-game losing streak and hand the Celtics their first loss in the month of February.

The move had a double effect. Boston’s starters victimized Milwaukee’s starting five with some uptempo play early, opening up a 10-point lead thanks to nine quick points from Bradley.

Jae Crowder with the fastball to Avery Bradley for the bucket in transition! pic.twitter.com/s6Jz1Xlhjd

But Carter-Williams, Monroe and the revamped Bucks bench took advantage of the Celtics’ bench late in the first quarter, closing the frame on a 10-4 run to pull within four.

MONROE DOCTRINE
The Celtics had no answer for Monroe in the second quarter.

The Bucks big man dominated Boston’s frontcourt, tallying 11 of his 15 first-half points in the second quarter and pretty much scoring at will in the absence of Amir Johnson, who picked up three fouls in the first quarter. Monroe wasn’t the only Buck to find success down low, as Milwaukee scored 34 of its first 53 points in the paint.

While the Bucks racked up 27 points in the second frame, the Celtics managed to maintain their slim lead with the help of nine points each from Marcus Smart and Jerebko in the quarter.

NO CONTEST
The Bucks exploded in the third quarter, victimizing the Celtics’ poor defensive effort to open up a 19-point lead.

Milwaukee engineered a 10-0 run early in the frame, but that only was the beginning. Monroe continued his dominant play and found Carter-Williams for a few open looks after Boston’s weak double-team efforts. The Bucks also continued to get into the paint at will.

Milwaukee made 15 of its 20 shots in the third to outscore the Celtics 40-20 in the frame, their highest total in any quarter this season.

STORMING BACK
As has been the case all season, though, the C’s didn’t give up.

Boston launched an amazing comeback in the fourth quarter, going on a huge 19-5 run to whittle away Milwaukee’s double-digit lead. After Crowder’s 3-pointer tied it, Monroe scored in the post with two seconds remaining to put the Bucks up two. But Jerryd Bayless fouled Olynyk on the Celtics’ ensuing inbounds play, and the Celtics forward calmly drilled both free throws to tie the score.

With 0.6 seconds left, however, Bradley instinctively fouled Middleton as he received the inbounds pass in a lapse of judgment that sealed Boston’s fate.

PLAY OF THE NIGHT
This pretty nifty play from Olynyk in an otherwise ugly third quarter:

How about that concentration? Kelly Olynyk pops up off the floor and tips one in for two. pic.twitter.com/VFY25gqdm9

UP NEXT
The Celtics will welcome some old friends to TD Garden in their final game before the NBA All-Star break. Boston on Wednesday will battle Doc Rivers, Paul Pierce and the Los Angeles Clippers, who have won seven of their last eight games and sport a 35-17 record. Tipoff is scheduled for 7:30 p.m. ET. 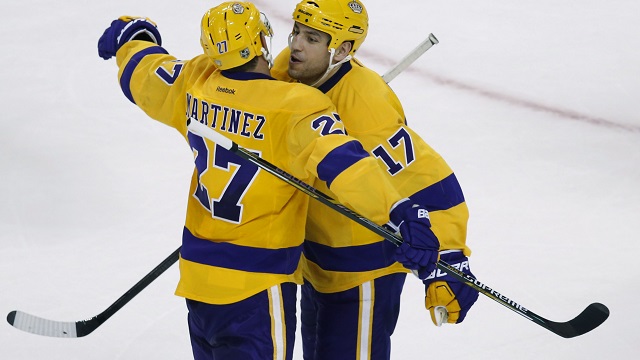