The Patriots’ defense provided a glimmer of hope it might be better than average in New England’s 26-10 win over the Los Angeles Rams on Sunday.

Granted, their dominant performance came against one of the worst teams in the NFL, but they allowed just 25 first-half yards, three points through the first 58 minutes of the game, generated two takeaways and four sacks and performed as fans hoped the defense would look all season.

Let’s go through those six big plays to find out how the Patriots finally were able to get more aggressive on defense.

Sack No. 1
The Patriots’ first sack came on a blitz by slot cornerback Logan Ryan, who did a nice job of masking his blitz before the play. The Patriots, in nickel, put their six linebackers and defensive linemen near the line of scrimmage, giving Rams quarterback Jared Goff and his offensive line uncertainty about who would rush and drop.

Jabaal Sheard, lined up at left defensive end, dropped into coverage. Linebacker Shea McClellin showed blitz then also retreated back into coverage. Defensive end Chris Long ran a stunt, drawing the offensive line to the middle of the field. Here’s what Goff saw prior to the snap, with Kyle Van Noy and McClellin lined up in the A-gap, looking like they were ready to blitz. Ryan got a nice jump off the snap and made a bee-line for Goff while safety Devin McCourty dropped down and took over in coverage. Ryan finished the job by grabbing Goff by the back of his jersey and dragging him down. Sack No. 2
The Patriots were in their base defense for their next sack and once again had Van Noy and McClellin near the line of scrimmage, except this time they were on the edge.

At the snap, the Patriots dropped into a Cover 2. Rob Ninkovich, rushing off the left side, beat the Rams’ right tackle easily. Ninkovich looped around the edge and chased Goff down for the sack. Sack No. 3
The Patriots were in dime coverage for their third sack and had Ninkovich, Dont’a Hightower, Trey Flowers, Van Noy and Chris Long near the line of scrimmage. Ninkovich came off the edge, Hightower ran a stunt, Flowers rushed up the middle, Van Noy showed rush then dropped back into coverage, freezing the Rams’ left guard while Long got inside Los Angeles’ left tackle using a spin move. Van Noy is still showing rush while Goff drops back. Here’s Long, on the right side, midway through his spin move with a huge gap on his left. Long, Hightower, Flowers and Ninkovich all were in the backfield on a well-designed rush. Sack No. 4
The Patriots finally got home on a stunt with their fourth and final sack. The Patriots had McClellin, Ninkovich, Flowers, Long and Van Noy near the line of scrimmage. McClellin ran a stunt around Ninkovich while Van Noy dropped into coverage. McClellin then had a wide open path to the quarterback with Ninkovich suddenly eating up two blockers. Interception No. 1
The Patriots sent six rushers on Malcolm Butler’s interception — the Patriots’ first since Week 7. The pressure forced Goff to rush his throw. It went off tight end Lance Kendricks’ fingertips and into Butler’s waiting arms. Interception No. 2
Jabaal Sheard beat a double team to hit Goff’s arm while the rookie QB attempted to throw to wide receiver Brian Quick, who was being covered by Butler. The ball hung in the air as Van Noy leaped up and grabbed the pass. The Patriots are starting to get creative and aggressive on defense. They bring a bunch of players down near the line of scrimmage, and the opposing QB and O-line have no idea who will be rushing and who will be dropping because they’re all similar athletes who can cause problems in multiple ways. Sheard is probably the worst in coverage of all of the Patriots’ hybrid defenders and on top of forcing the Van Noy interception, he also broke up two passes while dropping into zone coverage.

It was the perfect game plan against a young, inexperienced quarterback, but it’s not as if it won’t work against veteran QBs, too. Uncertainty is uncertainty, and the confusion can cause havoc against any offensive line, creating sacks and turnovers.

Here are other observations from this week’s film review:

— Let?s give credit where it?s due to Patriots second-year right guard Shaq Mason, who has improved leaps and bounds during the season. He?s been one of the Patriots? best offensive linemen since the bye as both a run blocker and pass protector.

— Tight end Martellus Bennett has shoulder and ankle injuries, but it was concerning to see him show a complete lack of effort on at least three run blocks. There was a play midway through the second quarter where he simply was in the way on a 1-yard loss by LeGarrette Blount. The Patriots picked up just 2 rushing yards on the three plays noted.

— Cornerback Eric Rowe had another strong game before leaving with a hamstring injury. Cyrus Jones came in and allowed the last-second touchdown to the Rams on some miscommunication with his fellow defensive backs. Click here for Week 13 and season-long coverage, pass rush, offensive line and offensive passing advanced stats.

— When the Patriots traded for Van Noy then made him inactive for two games, I wondered if he was long for the roster. Three games later, he?s playing 79 percent of defensive snaps as the chief fill-in for Jamie Collins. Van Noy has been solid in all facets.

— Sheard also had a solid overall game. It seems the Patriots making him a healthy scratch against the San Francisco 49ers properly reset his game. He was solid in run defense, pass rush and coverage.

— The Patriots? interior defensive line, especially Alan Branch and Malcom Brown, deserve more credit for their performance this season against the run. Brown does his specific job about as well as any Patriots player. The Patriots’ D-line shut down Todd Gurley. 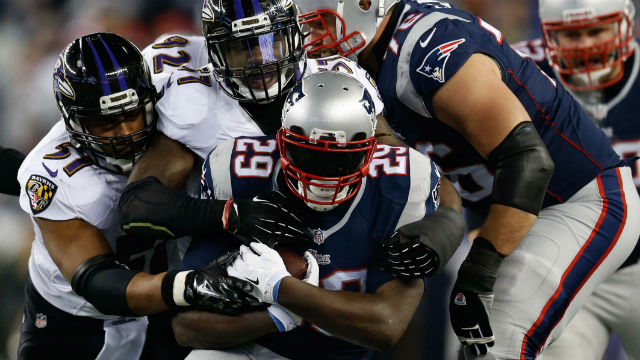