Well, that was ugly for the Boston Celtics.

The free-falling New York Knicks righted the ship, at least for one night, Wednesday with a 117-106 win over the Avery Bradley-less (Achilles) Celtics at TD Garden.

The glaring stat of the night was the rebounding differential, as New York held a healthy 57-33 advantage on the glass over Boston. Derrick Rose led the Knicks in scoring with 30 points and 10 rebounds, while Isaiah Thomas led all scorers with 39 points.

SEE-SAW HALF
The Celtics had the first significant run of the night when they turned a one-point game into a 24-15 lead with just under four minutes remaining in the first quarter. They extended their advantage back to nine multiple times over the next few minutes, but that lead nearly evaporated by the end of the frame thanks to a 10-4 Knicks run, which made it 34-31 C’s heading into the second. Crowder led all scorers with 11 points in the opening 12 minutes.

New York built a 51-43 advantage with just over five minutes remaining in the half, but Boston scored seven straight points to cut the deficit to one. However, it was all Knicks from there as they led 63-54 at halftime. Thomas had a monster second quarter for the C’s with 13 of his 19 first-half points, but the rest of the team only scored seven total points in the frame. Rose led the way for New York in the first half with 14 points.

COMEBACK TIME?
The Celtics slowly chipped away at the deficit, getting to within one point after Jordan Mickey made a pair of free throws with 4:33 remaining in the third quarter. New York built a little bit of separation after, though, and led 88-83 heading into the fourth. Thomas continued to keep Boston in the game, as he added 12 more points in the third stanza.

The C’s once again pulled to within a point after Thomas made two free throws with just under nine minutes remaining, but the Knicks’ Justin Holiday and Courtney Lee hit back-to-back 3-pointers, respectively, to extend their advantage back to nine. From there, things never got better for Boston.

PLAY OF THE GAME
Thomas knows how to make highlight-reel plays.

UP NEXT
Boston will have a few days off before they return to TD Garden on Saturday for a matchup with Evan Turner and the Portland Trail Blazers. Tip-off is scheduled for 5 p.m. ET. 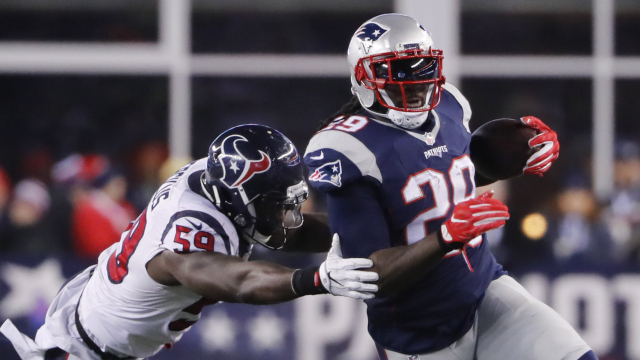 Why LeGarrette Blount Has Thrived With Patriots And Enjoys New England