The 118-110 scorecard in favor of Canelo is a joke. This fight was incredibly close. And if anyone won the fight — again, I had it scored a draw, too — it was GGG, who controlled the pace and was the aggressor.

It’s a shame that we don’t have a winner, but after what we saw from these two fighters, boxing fans should be salivating for a rematch.

It's over. The best fight in boxing delivered. #CaneloGGG pic.twitter.com/VPgvE8Gujz

12 rounds of fury ends in a stalemate. #CaneloGGG ruled a draw. pic.twitter.com/StLZiGoxLa

It's a DRAW! One of the best boxing fights in the history of #boxing #CaneloGGG finishes as a draw ? pic.twitter.com/yMwKYcVXCK

We’re going to the scorecards after an eventful 12th round that could have gone either way. Both fighters landed big punches and they went toe to toe in the closing moments.

We’ll give Canelo a slight edge for his work early in the round, which would give our scorecard a draw. Stay tuned for the decision.

Round 11: Another round that was almost too close to call. GGG was the aggressor, but Canelo is starting to land more counterpunches as this fight winds down.

This fight is coming down to the wire and could be decided in the final round.

Round 10: Canelo mounted a big rally early in Round 10. He landed a heavy shot and deflected a haymaker counterpunch from GGG.

GGG just keeps walking right through Canelo’s punches, though. It made the latter part of the round more interesting, even though Canelo seemed to have a slight edge when all was said and done.

Round 9: Some more heavy shots thrown (and landed) in Round 9.

GGG had the edge in tempo, again backing up Canelo. Canelo responded with a very big shot from off the ropes, but GGG took it like a champ and continued to land shots later in the round.

This is shaping up to be a classic.

Round 8: A couple of big uppercuts were thrown in Round 8 by both fighters. But still, GGG was the aggressor. He keeps coming at Canelo, who needs to start landing more counterpunches if he’s going to have a chance in the later rounds.

Round 7: GGG again looked like he was measuring Canelo. And although Canelo continued to show good defensive work up against the ropes, GGG seemed much more in control.

Aim small, miss small. Maybe that’s the game plan here, as GGG is controlling Canelo with his jab, perhaps in an attempt to unload a big shot at some point.

GGG is walking Canelo down a bit, but he’s not quite as aggressive as he’s been in previous fights, seemingly recognizing that Canelo could fire back with a haymaker upstairs. This is a very close fight, with GGG looking better as the bout progresses.

Round 5: A fight just broke out, folks. This was an action-packed round that saw the crowd come alive.

GGG went on the attack as Canelo fought up against the ropes. GGG appeared to be in control, but Canelo again shook his head as if he wasn’t fazed by the blows he received.

The round ended with Canelo fighting his way off the ropes to the crowd’s delight. Things are getting very interesting and Round 6 could be a fight-changer.

This was by far GGG’s best round. He was the more aggressive fighter, working on a defensive Canelo up against the ropes at one point, to which Canelo shook his head.

Canelo didn’t take any huge shots, but the momentum could be shifting a little bit. GGG is looking for his spot.

Round 3: It’s somewhat of a role reversal here. GGG is throwing and landing more punches, but Canelo is landing the bigger shots, particularly to his opponent’s body.

Round 3 saw more of the same, with GGG not taking too many chances, instead firing off jab after jab. Canelo, for the most part, has been outboxing GGG, though GGG started to get a little looser toward the end of the round.

Round 2: Canelo has an early edge in power punches landed, with many of them going to GGG’s body. Pretty much every punch GGG has landed so far has been a jab to Canelo’s head.

We’ll see if the action picks up in Round 3, but so far, both fighters are feeling each other out.

Right now, Canelo looks like the more relaxed fighter. And GGG seemed to show his opponent a ton of respect by not completely coming forward.

.@Canelo makes his way down to an energetic and packed house! #CaneloGGG pic.twitter.com/tpec98mcnD

I’ve flip-flopped on this fight several times, but I keep circling back to Canelo. He’s a younger, elusive counterpuncher capable of slipping Golovkin’s relentless attack. So long as he survives the middle rounds, when GGG could turn things up a notch, I believe Canelo will walk away with the decision.

10:51 p.m.: The three national anthems — United States, Mexico and Kazakhstan — currently are being performed inside the ring.

As the anticipation builds — there’s suddenly a distinct buzz in the air — and the fighters prepare to walk out to the ring, let’s take one last look at some of our preview content, including predictions for the fight.

10:44 p.m.: JoJo Diaz put the finishing touches on a victory over Rafael Rivera.

10:31 p.m.: Joseph “JoJo” Diaz, Jr. and Rafael “Big Bang” Rivera currently are throwing down in the squared circle, with Diaz seemingly holding a significant advantage on the scorecards.

As that wraps up, it’s been mentioned several times on the HBO pay-per-view that the Canelo Alvarez vs. Gennady Golovkin main event will take place right around 11 p.m. ET — not way later, as sometimes happens with big fights.

So, plan accordingly. And by that, I mean just stay right here.

Diego De La Hoya absolutely teed off on Randy Caballero, cruising to a unanimous decision victory that pushed his record to 20-0.

One judge determined that De La Hoya won every round, scoring the fight 100-90. The other two judges scored it 98-92.

Canelo has sported a somewhat bushy beard in the lead-up to his fight with Golovkin, and it sounds like GGG’s camp is concerned about the facial hair potentially being an advantage.

Abel Sanchez tells Ref Kenny Bayless he has issues with the beard length of #Canelo 's beard. ? will it help cushion the blow's of #GGG ? pic.twitter.com/Z63gwexzuc

9:15 p.m.: Randy Caballero and Diego De La Hoya are squaring off, but let’s use this as an opportunity to see what folks in the boxing community are saying about the main event, Canelo Alvarez vs. Gennady Golovkin.

Here are some keys, according to George Foreman, who, in case you forgot, was a two-time world heavyweight champion before he took the grilling industry by storm:

Keys for GGG; don't get caught up in the moment, this will be a crowd like none other for him don't freeze

Keys for Canelo; don't let ggg touch you, stop,block & get out of the way of everything

How about a little Sugar? Sugar Ray Leonard, take it away…

A great fight between two amazing fighters this weekend! @GGGBoxing vs. @Canelo . Here are my thoughts. What do you think will happen? ? pic.twitter.com/V4vVcdG49s

Ryan Martin defeated Francisco Rojo via split decision to improve to 20-0. Rojo falls to 20-3 with the loss.

8 p.m. ET: Canelo Alvarez and Gennady Golovkin have been on a collision course for years.

On Saturday night at T-Mobile Arena in Las Vegas, the two freight trains will crash head-on in a 12-round superfight for GGG’s WBA, IBF and WBC middleweight titles. It’s the biggest matchup that boxing can offer, as Canelo and GGG are considered among the best pound-for-pound fighters in the world.

Canelo, a native of Mexico, carries a 49-1-1 record (34 knockouts) into the bout. The 27-year-old last defeated Julio Cesar Chavez via unanimous decision back in May. His only loss to this point came via majority decision against Floyd Mayweather Jr. in September 2013. Canelo has won seven consecutive fights since that lone defeat.

Golovkin, known by most as “GGG,” is a knockout artist from Kazakhstan. The 35-year-old owns a perfect 37-0 record, with 33 of his victories coming via KO. He last fought in March, stopping Daniel Jacobs via unanimous decision in one of GGG’s few fights that didn’t end in a knockout.

Saturday night’s pay-per-view event is underway, with three undercard bouts on the PPV paving the way for the much-anticipated Canelo vs. GGG main event. Here are the other scheduled fights:

We’ll keep you updated right here throughout the evening on what’s going on at T-Mobile Arena, so stick around. Once the Canelo vs. GGG fight starts, we’ll provide round-by-round coverage, with our own scorecard, highlights and a roundup of what the experts are saying. 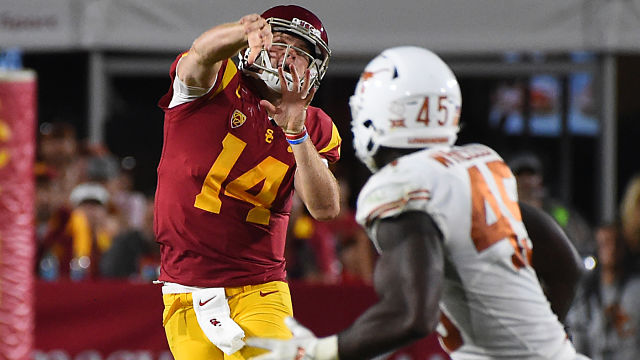 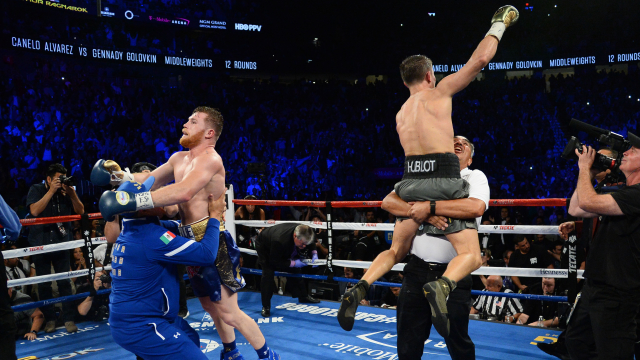 Canelo Vs. GGG Fight Ends In Controversy After Going To Scorecards