The New England Patriots imposed their will on the Atlanta Falcons on a fog-filled Sunday night in Foxboro, Mass., rolling to an easy victory at Gillette Stadium.

Tom Brady threw two short touchdown passes, the Patriots’ quartet of running backs racked up 162 yards on the ground, and New England’s defense stymied Matt Ryan and the Falcons throughout the evening. Atlanta went 2-for-9 on third-down conversions and 1-for-4 in the red zone.

Up next for the Patriots is a home date with the Los Angeles Chargers next Sunday.

Julio Jones hauled in a touchdown over Malcolm Butler to cap a scoring drive that took 5:06 off the clock.

Even in an ass kicking, Julio gonna Julio. pic.twitter.com/eTgbWbQz2t

Jones has been highly productive for Atlanta tonight, catching nine passes on 13 targets for 99 yards and that one score.

Fourth quarter, 9:15, Patriots 23-0: Stephen Gostkowski booted another field goal through the oppressive fog — this one a 38-yarder — to extend the Patriots’ lead.

New England has relied on running plays and short passes for most of the second half, and they now are up to 133 rushing yards on the night, a new season high.

Fourth quarter, 14:32, Patriots 20-0: The Patriots spoiled the Falcons’ best scoring chance yet, stopping them on two plays from the 1-yard line to regain possession.

After Johnson Bademosi and Patrick Chung combined to bring Mohamed Sanu down at the 1-yard-line, Malcolm Butler broke up a pass intended for Julio Jones and, on fourth down, Kyle Van Noy dropped Taylor Gabriel in the backfield to keep Atlanta off the board.

Chris Hogan helped carry the Patriots’ offense on the drive, catching passes of 12, 9 and 30 yards. Tom Brady also scrambled for 6 yards on third-and-3.

Patriots defensive tackle Malcom Brown is questionable to return with an ankle injury.

Third quarter, 10:35, Patriots 17-0: The Falcons finally got their ground game going a bit as the second half got underway, but their latest drive only ended in more disappointment.

After a 21-yard run by Devonta Freeman brought the Falcons into the red zone, Matt Ryan misfired on throws to Julio Jones and Mohamed Sanu in the end zone, and Matt Bryant clanged a 36-yard field-goal attempt off the left upright.

So… it's just a bit foggy in Foxborough. #ATLvsNE pic.twitter.com/BtimXIIygD

Halftime, Patriots 17-0: Tom Brady ran the two-minute drill to perfection, and the Patriots added another score just before halftime.

Pure precision from the Patriots on that drive.

The Falcons went scoreless on the ensuing drive to wrap up the second quarter.

Over the past three-and-a-half quarters (plus an overtime), New England has outscored Atlanta 48-0.

Second quarter, 1:40, Patriots 10-0: The Falcons converted a fourth-and-7 earlier tonight. No such luck on fourth-and-6.

Matt Ryan threw incomplete to Mohamed Sanu at the Patriots’ 47-yard line to turn the ball over on downs.

Rookie Adam Butler picked up his first career sack two plays earlier, bringing down Ryan to set up a second-and-20.

Second quarter, 4:42, Patriots 10-0: Rob Gronkowski atoned for a false start penalty on third-and-3 by hauling in a 27-yard pass along the sideline one play later.

The catch was part of a 14-play, 69-yard drive that culminated in a Stephen Gostkowski field goal.

Rex Burkhead saw his first action since Week 2 during the drive, carrying the ball six times for 31 yards.

Second quarter, 11:19, Patriots 7-0: The Falcons’ latest drive lasted just over a minute as the Patriots forced their second three-and-out of the night.

Matt Ryan tried to get the ball to Julio Jones on first and third down, but both passes fell incomplete. Duron Harmon and Johnson Bademosi applied tight coverage on the star wideout, with Bademosi being credited with a pass breakup on the third-down throw.

After a roughing the passer penalty wiped out an interception, Brandin Cooks took a jet-sweep shovel pass from Tom Brady and sprinted 11 yards for a touchdown, with Rob Gronkowski paving the way as a lead blocker.

Robert Alford — who had a pick-six in Super Bowl LI — had intercepted an ill-advised Brady pass in the end zone two plays earlier, but defensive end Adrian Clayborn was flagged for hitting Brady late, wiping away the pick and extending the Patriots’ drive.

Cassius Marsh sliced through the Falcons’ line and swatted down Matt Bryant’s 37-yard field-goal attempt to keep this game scoreless.

Cornerbacks Malcolm Butler and Jonathan Jones both made key plays to help keep Atlanta out of the end zone, with Butler swooping in to tackle Tevin Coleman for no gain on first-and-10 from the Patriots’ 19-yard line and Jones breaking up a pass intended for Andre Roberts on third-and-10.

The Falcons successfully converted a fourth-and-7 earlier in the drive, with quarterback Matt Ryan scrambling for a first down.

First quarter, 7:15, 0-0: The Patriots very nearly got Tom Brady killed on the first play of their second drive.

On first-and-10, De’Vondre Campbell came in untouched off the right edge and buried the Patriots quarterback, forcing a fumble that New England was able to recover.

One play later, Brady connected with Rob Gronkowski on a deep pass, but the tight end was called for offensive pass interference — the eighth flag we’ve seen already tonight.

James White failed to pick up a first down on a screen pass, and Ryan Allen punted it away again.

First quarter, 9:35, 0-0: Good start for the Patriots’ defense, which forced a three-and-out on the Falcons’ first possession of the evening.

David Harris, who had played just seven snaps all season and none since Week 3, got the start at middle linebacker for New England.

Officials called five penalties during the Patriots’ first possession and also halted the game another time to reposition the chains. The drive ultimately went nowhere, with New England picking up two first downs before being forced to punt the ball away.

First quarter, 15:00, 0-0: The Falcons won the opening coin toss and chose to defer. It’ll be Patriots ball to start as we kick things off at Gillette Stadium.

7:37 p.m.: The Patriots donated 200 tickets to tonight’s game to military members — an initiative suggested by long snapper Joe Cardona, who also serves as an officer in the U.S. Navy Reserve.

Those military members currently are watching warmups from the sideline. They received a standing ovation from the fans in attendance as they walked around the field.

Fans give a standing ovation to military personnel as they walk onto the field. Patriots players donated 200 free tickets, per @MikeReiss pic.twitter.com/l2pFxOuNmD

7:05 p.m.: In addition to cornerbacks Stephon Gilmore and Eric Rowe, the Patriots also will be without linebacker Elandon Roberts tonight. Roberts, who is dealing with an ankle injury, officially is inactive.

Running back Rex Burkhead is active for the first time since Week 2. Linebacker David Harris is active, as well. Harris has not played a snap since Week 3 and was a healthy scratch for two of the past three games.

4:15 p.m.: Want to relive Super Bowl LI ahead of tonight’s showdown? Take a listen to the episode of “Between the Tackles” we recorded just hours after that unforgettable game.

Also, here’s a look at the Color Rush uniforms the Patriots will be wearing tonight. They debuted the all-blue uni set in last year’s Week 3 win over the Houston Texans.

12:30 p.m. ET: Greetings from Gillette Stadium, where the New England Patriots are preparing for a rematch with their Super Bowl LI adversary, the Atlanta Falcons.

The Patriots and Falcons both have endured some growing pains since that championship classic, with New England’s new-look defense enduring repeated communication breakdowns early in the season and Atlanta’s offense lacking explosiveness under new offensive coordinator Steve Sarkisian.

The Patriots, winners of two straight, sit at 4-2 entering today. The Falcons are 3-2 after suffering back-to-back losses at home to the Buffalo Bills and Miami Dolphins.

One of the top matchups to watch in this game will Falcons wide receiver Julio Jones against New England’s secondary, which will be missing at least two of its top three cornerbacks.

Stephon Gilmore (concussion/ankle) and Eric Rowe (groin) already have been ruled out, and Johnson Bademosi (abdomen) is listed as questionable. The Patriots chose not to call up a cornerback from the practice squad, though, which likely means they expect Bademosi to be available.

Neither Jones nor Falcons quarterback Matt Ryan have put up particularly impressive stats this season, but New England’s defense has been carved up by much less talented passers this season, allowing 300-plus passing yards in all six games. Devonta Freeman and Tevin Coleman also will be threats against a Patriots D that struggles to cover running backs in the passing game.

Linebacker Elandon Roberts and tight end Jacob Hollister also are listed as questionable for the Patriots. Running back Rex Burkhead was removed from the injury report Friday and is expected to play for the first time since Week 2.

We’re still about eight hours from kickoff, which is set for 8:30 p.m. ET, but keep it right here throughout the afternoon for all your pregame updates and analysis.

Scouting the Falcons: What to expect from reigning NFC champs >> 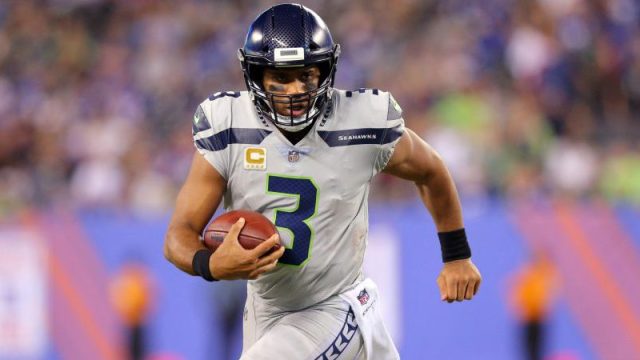 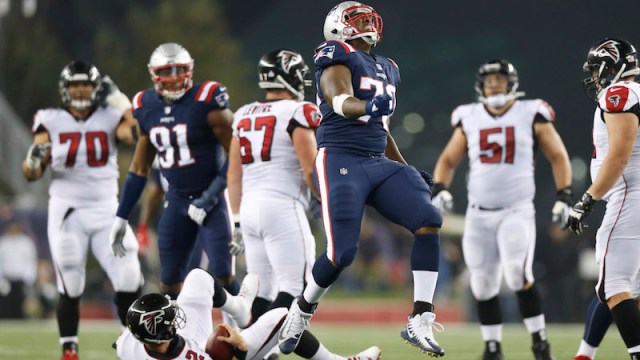