The Red Sox did not make a deal before the deadline.

3:58 p.m.: The Brewers have seemed hellbent on making something happen, and it looks they have their new second baseman.

Gausman to #Braves is complete. #Orioles

3:36 p.m.: The Chris Archer deal is done, according to Yahoo’s Jeff Passan.

Source: Chris Archer to the Pittsburgh Pirates is done.

Been told a few times today that a Red Sox move for a reliever before 4 is considered unlikely. Subject to change, of course… but possible they?re done before deadline.

Source: #pirates have worked out deal for Archer. At least one ML player is in package going to Tampa

3:25 p.m.: And it looks like the Braves are going to get the starting pitching help they’ve been seeking.

sources: braves have deal for gausman

Gotta think this means Chris Archer is indeed going to the Pirates, but we shall see.

3:22 p.m.: The Dodgers are going to have an entirely new infield when it’s all said and done at this rate.

#Dodgers close to acquiring Brian Dozier from #MNTwins, sources tell me and @DanHayesMLB.

as things stand now: braves may lead on gausman, pirates on archer (h/t @Joelsherman1). that could Harvey could wind up with brewers.

3:13 p.m.: Are the Pittsburgh Pirates of all teams ready to make one of the deadline’s biggest deals?

#Pirates are in front for Archer with 52 minutes to go to deadline. Told that is way #Rays are leaning.

For the Pirates, Archer would make a ton of sense because:
1. He'd help boost their rotation this year, as they try to continue their playoff push.
2. His contract works within their budget limits.
3. In a sense, he would fill the shoes left behind when they traded Gerrit Cole.

3 p.m.: One hour to go! Here’s the latest on Archer from the Tampa Bay Times’ Marc Topkin:

Hearing #Rays trade of Archer is becoming very, very likely, as high as ?90 percent.? Only question now is where – #Braves, #Brewers, #Pirates have been most speculated. And there are always the #Dodgers

sources: wilson ramos' deal to the Phillies is close

Source: Ramos to Phillis is a done deal.

The 30-year-old All-Star currently is on the 10-day disabled list with a hamstring injury but is expected to return soon and is batting at a .297 clip with 14 home runs and 53 RBIs.

2:48 p.m.: Here’s what we (reportedly) know about the Orioles: They’re dealing someone, and it’s not outfielder Adam Jones.

Orioles are close enough along with another trade that medicals are being reviewed. You know how that goes. Don't know names. I just know it isn't Jones.

2:40 p.m.: We’re down to the final 80 minutes before the MLB trade deadline. The Atlanta Braves may need to ice their feet.

Best response I've received regarding what the Braves might do today: "They are kicking a (expletive) ton of tires, I know that."

2:27 p.m.: Marlins outfielder Cameron Maybin is heading to the Seattle Mariners, The Athletic’s Ken Rosenthal confirmed. Ryan Divish of the Seattle Times was the first to report the news.

mariners get Cameron maybin for a prospect and international $. @ryandivish 1st

2:21 p.m.: Hey, we know a team reportedly interested in adding a bullpen arm…

The Blue Jays continue to try to check on interest in their veteran relievers, including John Axford, Tyler Clippard.

2:19 p.m.: The rebuilding Baltimore Orioles could sell off another piece before the deadline, according to Crasnick.

Dan Duquette continues to work the trade deadline. The #Orioles are closing in on another deal, source says.

Also hearing the #Brewers and #Cubs as two teams talking to the #Reds about Harvey. One MLB exec says Milwaukee would be an excellent fit for Harvey, who has thrived in a lower-profile environment in Cincinnati. https://t.co/3z07EuLNzV

1:44 p.m.: We have a Matt Harvey update! The Cincinnati Reds reportedly are committed to trading the veteran pitcher before the deadline.

sources: brewers and cubs are among main teams in mix for matt Harvey. (not likely braves, I am told).

1:37 p.m.: Here’s the latest on Archer from The Athletic’s Ken Rosenthal:

Sources: #Brewers, #Braves, #Pirates all strongly in mix for Archer, with #Dodgers and others potentially lurking. If bidding is indeed as furious as it sounds, the #Rays have played this exactly right, taking it to the last day, trying to extract maximum value.

1:23 p.m.: Elsewhere in Rays news… Chris Archer likely is headed to the National League, and the Atlanta Braves are the current leaders in the clubhouse, per The Athletic’s Jim Bowden.

#Braves emerging as favorites for Chris Archer but as we all know anything can happen with #Brewers #Pirates #Dodgers still lurking.

1:20 p.m.: Rays All-Star catcher Wilson Ramos could be on the move to Philly, reports Jeff Passan of Yahoo Sports.

Sources: Phillies and Rays are deep into talks on a deal for Wilson Ramos.

12:50 p.m.: It appears we have a done deal: Reliever Brad Ziegler is returning to the Arizona Diamondbacks, where he spent six seasons from 2011 to 2016.

The Arizona #Dbacks are trading for #Marlins closer Brad Ziegler.

Source: Brad Ziegler is going to Arizona. @Ken_Rosenthal said it was close.

This one is for real.

12:45 p.m.: Ziegler reportedly is close to a reunion in Arizona, per Ken Rosenthal.

12:35 p.m.: We have another deal! Detroit Tigers outfielder Leonys Martin is heading to the Indians, according to Robert Murray of The Athletic.

#Indians acquire Leonys Martin from the #Tigers in exchange for Willi Castro, sources tell The Athletic.

12:24 p.m.: It appears Ziegler is being traded — we just don’t know where. The Red Sox and Cubs reportedly are out, though.

Brad Ziegler has been traded, but not to the Chicago #Cubs, who had strong interest.

Source w/ knowledge of talks between Marlins/Red Sox re: Ziegler suggests Sox are "more interested in a power arm" if they add bullpen piece

Hearing #Marlins have not yet completed Brad Ziegler deal. Appears soon. field down to 1 or 2 and #Cubs are NOT in mix

11:50 a.m.: The Cubs are closing in on Ziegler, according to MLB Network’s Jon Morosi.

11:40 a.m.: After landing reliever Keone Kela, the Pirates are looking like serious suitors of Chris Archer, per Bill Brink of the Pittsburgh Post-Gazzette.

As of late last night, according to a source, the Pirates were linked to Archer in significant fashion.

We have seen the Pirates pursue upper-level pitchers at the deadline before (Lester and Price in 2014) and not make a deal. Thus, nothing guaranteed on Archer. But, they?re involved.

11:05 a.m.: Despite a 52-53 record and a 5 1/2-game deficit in the National League East, the Nationals have decided not to sell at the trade deadline, according to ESPN’s Buster Olney. That thwarts Boston’s pursuit of reliever Kelvin Herrera.

The Red Sox talked with Washington about Kelvin Herrera, but Nats informed other teams overnight they will try to win this year, so Herrera off the table — but they are willing to discuss either Gio Gonzalez or Jeremy Hellickson.

10:54 a.m.: The Cardinals appear to be getting prospects from the Rays in exchange for Pham.

10:50 a.m.: We have a deal! The St. Louis Cardinals are trading outfielder Tommy Pham to the Tampa Bay Rays, according to Yahoo Sports’ Jeff Passan.

Tommy Pham has been informed that he has been traded to the #Rays, but deal does not involve Chris Archer, per @JeffPassan

Mike Rizzo just reached out with this message:

"Bryce is not going anywhere. I believe in this team."

10:33 a.m.: On the non-Harper front, the Yankees apparently are in the market for an outfielder and are in talks with the Miami Marlins, per MLB.com’s Mark Feinsand.

Source: The Yankees have talked to the Marlins about Cameron Maybin. Yankees are expected to add an outfielder today with Aaron Judge and Clint Frazier on DL.

During talks with the Marlins, the Yankees have also discussed Brad Ziegler, per source.

10:17 a.m.: Did the Nationals get cold feet on a Harper trade? That’s what Jorge Castillo of the Washington Post seems to suggest here.

At least one team in touch with the Nationals heard the club had deals "lined up" for multiple players, including Bryce Harper, but got the sense ownership pulled the plug late last night.

10:14 a.m.: The Red Sox continue to be in the market for a reliever, according to The Athletic’s Ken Rosenthal.

10:03 a.m.: Buster Olney’s ESPN colleague, Jerry Crasnick, has a very different outlook on the possibility of Harper being traded.10

There's going to be a lot of Bryce Harper hysteria out there today, but the chances of him being moved by 4 p.m. are extremely remote, sources say. (If this is wrong and he's in another uniform in 6 hours, feel free to tweet me). #Nationals

9:45 a.m.: Adrian Beltre’s name popped up in a few trade rumors, but it appears he and Baltimore Orioles outfielder Adam Jones are staying put.

Texas #Rangers 3B Adrian Beltre and Baltimore #Orioles CF Adam Jones, each who have 10-and-5 rights and can veto trades, each are now expected to stay put their GMs say

9:32 a.m.: Keep an eye on the Cubs as they aim to bolster their bullpen, according to USA TODAY’s Bob Nightengale.

The Chicago #Cubs definitely will acquire another pitcher today, likely a reliever, and #Marlins closer Brad Ziegler remains the most likely target as the two teams are engaged in talks

Harper still seems unlikely to be traded, but some rivals suggest the team to go for it should be Philly: 1. they have the $, threshold space. 2. they tried for Adam jones and other OF. 3. they are in 1st place. 4. they're expected to go hard for harper and/or machado this winter

9:14 a.m.: Strong take here from ESPN’s Buster Olney, who expects the Nationals to move Harper by the end of the day. Olney mentions the Cleveland Indians, Chicago Cubs and Los Angeles Dodgers as potential suitors.

By the end of the day today, @Buster_ESPN expects Bryce Harper to no longer be a National. pic.twitter.com/dGg1vX3Nu6

8:43 a.m.: Could the Red Sox address their bullpen need by adding an old friend in reliever Brad Ziegler?

brad ziegler is another who's been linked to the Red Sox. they had him once. return not out of the question. he's likely to be traded today, though it's possible he could be an august trade, too.

8:21 a.m.: MLB Network’s Jon Heyman is throwing a bit of a wet blanket on the Bryce Harper trade rumors.

rivals continue to believe bryce harper is long shot to be traded. nats are only 5.5 games out & they'd risk fan revolt. also, they wouldn't get haul as rental. o's did well getting yusniel plus 4 for machado. but market is better for a ss/3B & manny was hitting 100 points higher

Billy Hamilton is a potential fit for the Indians, who seek a CF. They?ve asked about him in the past.

yankees are looking for a righty bat and at some pint spoke to the mets about jose bautista. mets don't view joey bats as a giveaway due to how well he's played in queens (124 ops plus), and yankees-mets trades are hard. so it's not extremely likely to happen.

7:45 a.m. ET: Fasten your seatbelts, folks. The last lap before Major League Baseball’s non-waiver trade deadline could be a wild one.

Teams have until 4 p.m. ET on Tuesday to make deals, and we already saw a few moves go down late Monday night. Here’s a quick recap of some notable deals:

All eyes will be focused Tuesday on our nation’s capital, however, as the Washington Nationals reportedly are open to trading star outfielder Bryce Harper.

Where will Harper and other big-name trade targets end up? Keep it here throughout the day for all the latest scuttlebutt and recaps of completed deals. 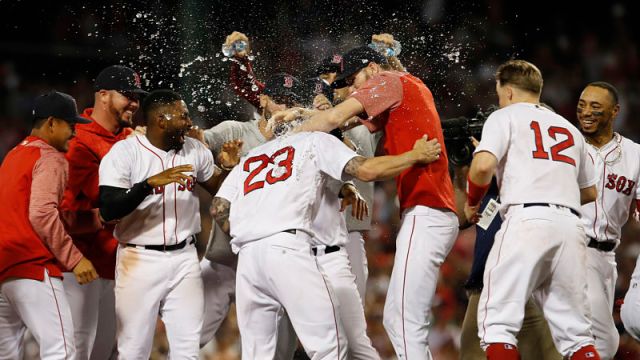 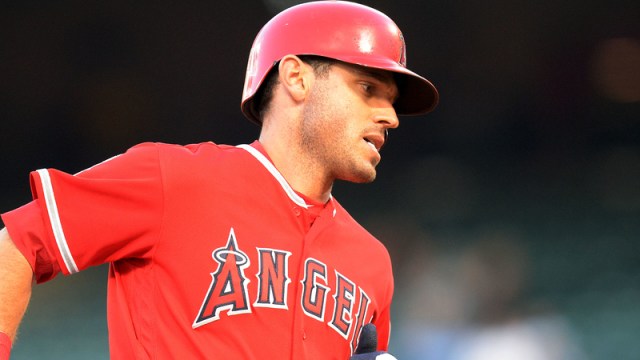