Why Was Rob Gronkowski On The Field For Dolphins' Game-Winning Play? - NESN.com Skip to content

MIAMI GARDENS, Fla. — With 69 yards between the line of scrimmage and pay dirt for the Miami Dolphins, New England Patriots players knew what was coming. Dolphins quarterback Ryan Tannehill wasn’t about to chuck the ball 75 yards for a Hail Mary. So, Miami would run a lateral play.

That’s what Patriots defenders said they expected after the game in the team’s locker room.

So, why on earth was tight end Rob Gronkowski, who already looks a step slower on offense this season and has little tackling history, the last line of defense at safety? Gronkowski slipped and couldn’t make the game-saving tackle near the goal line.

THE MIRACLE AT HARD ROCK STADIUM

Belichick apparently didn’t see it the same way as his defense.

“Yeah, they could throw it deep or they could run the desperado-type play, which was kind of like in between — a 20-yard pass then it turned into a desperado,” Belichick said.

“Yeah, unfortunately, we didn’t do a good job on it today,” Belichick said. “We needed to obviously coach it better, play it better.”

Gronkowski, however, had only practiced defensively against a long pass.

“We practice that play a few times for the hail mary,” Gronkowski said. “You’ve seen it before. You just go up, hit the ball. But they changed it up a little bit, and it just ended sucky. …

“Every time we practice it, it’s for the hail mary. You’ve got to be ready for anything. It’s football. The way it ended, it sucked. Never really been a part of anything like that.”

When Gronkowski was hurt earlier in the season, wide receiver Josh Gordon was used in his role as the last line of defense on a last-second deep play. Here was the Patriots’ defensive personnel on the play, per ESPN’s Mike Reiss:

Hindsight is 20-20, but it’s strange Devin McCourty, one of the Patriots’ surest tacklers, wasn’t in on a play that could turn into a “desperado.” It’s also worth considering putting safety Obi Melifonwu, who’s 6-foot-4, has a vertical leap of 44 inches and a much broader history of tackling, in Gronkowski’s role in the future.

If anyone on the Patriots had tackled better, it wouldn’t have mattered who was in Gronkowski’s spot. But it did come down to Gronkowski on Sunday, and the Dolphins came out with the 34-33 win because he was unprepared to make a tackle while playing in a situation he hadn’t practiced.

It’s rare to see the Patriots unprepared for a situation, but Gronkowski was thrust into one Sunday.

Tom Brady Laments Costly Sack In Loss To Dolphins: ‘Terrible Play By Me’ 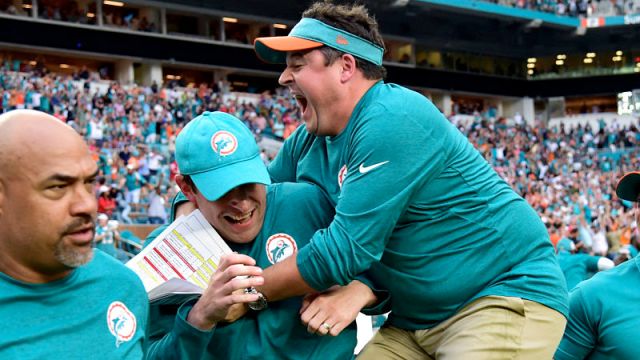 These Stats Show Dolphins’ Miracle Vs. Patriots Was Once-In-A-Lifetime Play