We hope you’re sitting down.

In case you haven’t heard, the Patriots led the Dolphins by five points when Miami got the ball back with seven seconds left and no timeouts at their own 31-yard line. Ryan Tannehill tossed a pass to Kenny Stills who hauled the pass in short of the 50-yard line. Stills lateraled the ball to DeVante Parker, who turned and pitched it to Kenyan Drake. The Alabama product broke two tackles, got a block and motored down the sideline to score the game-winning touchdown.

So, just how improbable was the Miami Miracle 2.0?

Well, according to ESPN Stats and Info, the Dolphins had a 0.1 percent chance of winning the game before they snapped the ball on the final play.

While it’s obvious Miami had little hope of winning the game, the length of the game-winning score made it all the more unlikely.

The @MiamiDolphins game-winning 69-yard touchdown on the final play against New England is the longest play from scrimmage to win a game with no time remaining in the fourth quarter since the 1970 merger. pic.twitter.com/EGsZPzqz6P

It also was a first in franchise history for the Dolphins.

Kenyan Drake's TD marked the first time the Dolphins scored a game-winning TD with no time left on the clock in franchise history. Team began playing in 1966.

With the win, the Dolphins moved to 7-6 and remain in the hunt for an AFC wild card berth. If the Fins make it to the dance, they’ll look back on a play they call “Boise” as the moment that got them back to the postseason.

Why Was Rob Gronkowski On The Field For Dolphins’ Game-Winning Play? 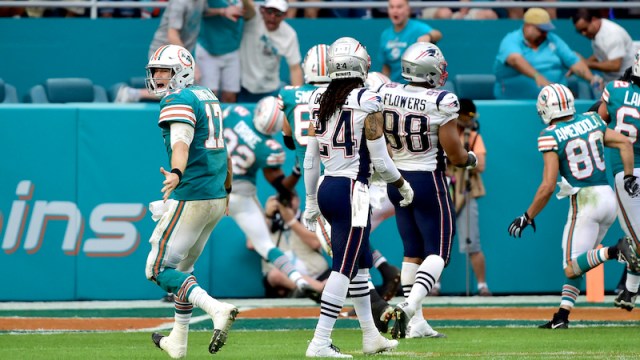