Red Sox's Matt Barnes Reveals What He Does To Prepare For Outings - NESN.com Skip to content

Matt Barnes has been crucial to the Red Sox’s success this season, serving as one of Boston’s best relief pitchers.

The Sox are 14-4 during Barnes’ appearances and totes a 1.42 ERA. He has just three saves on the season, but he’s given his team a chance to win every time he’s on the mound.

“We saw this coming last year, the situations he pitched in,” Cora said, via NBC Sports Boston. “Obviously we had Craig (Kimbrel), locking him in in the ninth inning. From the get-go from early (last) season whenever all those righties, the middle of the order guys, would come up in the seventh or the eighth it was Barnes and Joe (Kelly) had the lefties. He’s been good. He’s been good in the clubhouse with that group as far as preparation. His routine after games he learned a lot from Craig. So far, so good. He’s been amazing for us.”

As for Barnes, he’s strategic in how he prepares to go out there when called upon.

“I know it’s going to be narrowed down to two, maybe three innings,” he said. “It will be the seventh to the ninth, and more times than not, the eighth or the ninth. I just try and focus on a specific part of the lineup. I go through an entire scouting report on my own based on what I’ve done against them, what we’ve seen this year from them, and kind of go from there.

“It’s easy now, because I’ve developed a routine in how I do it, what I’m looking for, and I’ve accumulated a lot of ABs against a lot of these guys now,” he added, “so I know what works and what doesn’t work. Once you get into it, it’s not terrible.”

Well, it certainly shows that his routine is working for him. 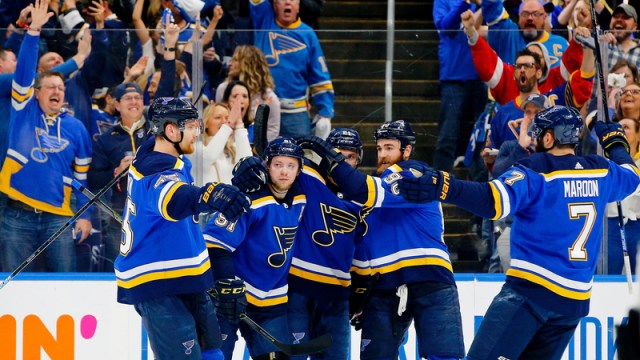 Blues Knock Out Sharks In Game 6, Will Play Bruins In Stanley Cup Final

Alex Cora Says Eduardo Rodriguez Must Improve On Getting Lefties Out