The NBA draft is now less than one week away, but the Boston Celtics are continuing to leave no stone unturned.

Danny Ainge and the rest of Boston’s front office is taking a look at around 100 prospects, according to director of player personnel Austin Ainge, but there are a few players they’re zooming in on a bit more than others.

Brewster Academy’s Jalen Lecque told Zach Braziller of the New York Post that he will have his second workout with the Celtics before Thursday’s draft. The 6-foot-4 New Jersey native took the prep-to-pro route this spring, deciding to head straight to the draft instead of attending N.C. State.

He’s an extremely explosive athlete, presenting a ton of upside to whichever team takes a flier on him (whether he’s selected or not). The 18-year-old, who turns 19 on Thursday, is a tough competitor, whose physicality will help him become an effective perimeter defender.

Check out the highlights from his senior season at Brewster: 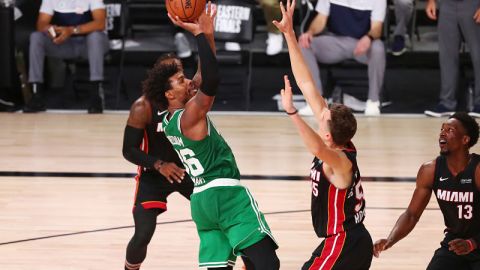