FOXBORO, Mass. — One of the most intriguing roster battles of New England Patriots training camp is the one between slot corner hopefuls Jonathan Jones and Duke Dawson.

Jones easily took Round 1 on Thursday.

While Dawson, the 2018 second-round draft pick who essentially redshirted as a rookie, struggled in coverage during the Patriots’ first camp practice, Jones excelled, intercepting one pass and breaking up another in an all-around impressive performance.

?It was a good overall day for the whole defense,” said Jones, who re-signed with the team as a restricted free agent in April. “Obviously, first day, there?s a lot we?ve got to improve on. We?ve got to get better, but first day, it was a good start. We’ll go back, look at the film, and tomorrow, we’ve got to build on it. Can’t go backwards.”

Jones’ interception came on the first competitive rep of camp. During a 2-on-2 drill, he wrestled a Tom Brady pass away from wide receiver Braxton Berrios in the end zone. It was the only pick any Patriots defender recorded on Day 1.

Berrios beat Jones later in the same drill, but the cornerback prevailed again in 11-on-11s, getting his hand on another attempted Brady-to-Berrios connection near the goal line. Dawson was in coverage on touchdown passes to Maurice Harris (from Brian Hoyer) and Stephen Anderson (from Jarrett Stidham) during full-team drills.

“You want to go out here and compete,” Jones said. “The first goal is to make the team and continue to get better, help the team in any way that you can, and in the end, everything will work itself out.?

In most secondaries, a player of Jones’ caliber likely would be guaranteed a roster spot. The fourth-year pro ranked second among Patriots corners in snaps played in each of the last two seasons and is one of the team’s top special teamers. In the 2018 postseason, Jones played a key role in stifling Tyreek Hill during the AFC Championship Game and then surprisingly started at safety in Super Bowl LIII.

But with the wealth of talent the Patriots have stockpiled at the cornerback position — Stephon Gilmore headlining a group that also includes Jason McCourty, J.C. Jackson, Keion Crossen and second-round rookie Joejuan Williams — it’s difficult to call Jones a lock at this point, especially since keeping him likely would mean cutting ties with a player in Dawson, whom they used a top-60 pick just last year.

Jones has to be considered the strong favorite at this point, however, especially if he continues to perform the way he did Thursday.

“He’s a feisty player,” safety Duron Harmon said of Jones. “A guy that works hard, doesn’t quit, plays hard, tackles, covers. (He’s) a guy who’s just consistent. He tries to do everything right. He’s a guy that we’re lucky — and I’m lucky — to have as a teammate.”

“(He brings) great energy,” Gilmore added. “(He’s a) great player, great speed, competitive. Everybody’s trying to get better, and he’s one of the good players on our team that I respect a lot.”

Jones also expanded his skill set Thursday by taking reps as a kick returner. The Patriots have a need there following Cordarrelle Patterson’s departure in free agency. Asked how much kick return experience he has, Jones replied: “Not much.”

“But it feels good,” the 25-year-old added. “It feels good to be out there. Coach asked me to do it, so I’ll step up and do it. Anything I can do to help the team and be out there, I’m down for.” 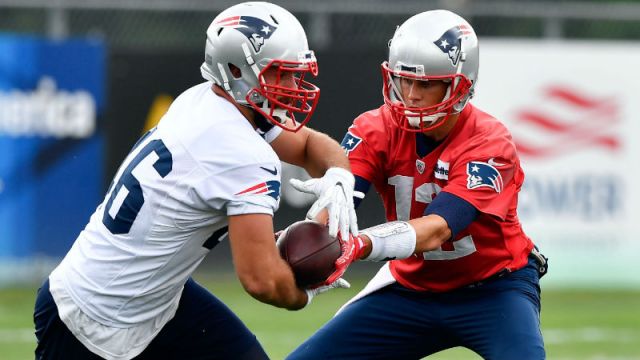