Final, Titans 20-13: The New England Patriots? season is over.

The Tennessee Titans rode a dominant effort by running back Derrick Henry (182 rushing yards) to a 20-13 victory at Gillette Stadium on Saturday in the wild-card round of the 2019 NFL playoffs.

Neither team scored in the second half until former Patriots cornerback Logan Ryan intercepted a deflected Tom Brady pass in the final seconds and returned it for a touchdown.

A pivotal moment sequence came late in the second quarter when New England was stuffed on three consecutive carries from inside the 2-yard line before settling for a field goal. Henry scored what proved to be the game-winning touchdown on the ensuing Tennessee possession.

This loss marks the first time the Patriots have been eliminated before the AFC Championship Game since the 2010 postseason and ends their streak of three consecutive Super Bowl appearances.

It also might have been Tom Brady?s final game in a Patriots uniform. The 42-year-old is set to hit free agency for the first time in his NFL career when the league year opens in March.

Fourth quarter, 3:10, Titans 14-13: Julian Edelman dropped what would have been a first down, and the Patriots punted.

They need a stop from their defense with just over three minutes remaining.

Fourth quarter, 4:44, Titans 14-13: The Patriots forced a Titans punt, but Tennessee was able to drain eight full minutes off the clock before doing so.

Stephon Gilmore suffered an injury during the drive but later returned.

New England needs a vintage drive by Tom Brady. He’ll take over at his own 11.

Fourth quarter, 12:45, Titans 14-13: The Patriots couldn’t turn Ryan Tannehill’s ill-advised interception into points. They picked up one first down via penalty, then punted.

Jake Bailey, who has not had his best game tonight, sailed the punt into the end zone, resulting in a net distance of just 27 yards.

Third quarter, 2:30, Titans 14-13: Tom Brady delivered his best ball of the night to Julian Edelman to move the chains on third-and-2. It was just the second catch of the night for the Patriots’ top receiver.

New England’s drive stalled three plays later, however, resulting in another Jake Bailey punt. The Patriots have more first downs than the Titans (16 to 13) but have been unable to put together a substantial possession in this second half.

Kyle Van Noy strip-sacked Ryan Tannehill, and though Tennessee recovered, J.C. Jackson broke up a deep ball to Corey Davis one play later to bring the punting unit out.

That was Davis’ first target. He and A.J. Brown have combined for one catch for 4 yards tonight.

Third quarter, 8:02, Titans 14-13: An ineligible man downfield penalty on Shaq Mason wiped away a 38-yard completion to Ben Watson on third-and-10. A screen to James White one play later went nowhere, forcing the Patriots to punt.

N’Keal Harry also dropped a pass earlier in the drive after catching one for 14 yards.

Third quarter, 11:23, Titans 14-13: Stopping Derrick Henry remained an issue for the Patriots as the second half began, but they were able to force a Titans punt.

It appears unlikely Patrick Chung will return to this game. There’s still no sign of him on the Patriots’ sideline.

Halftime, Titans 14-13: The Patriots are lucky to be down just one after a Tom Brady pass bounced off Ben Watson’s hands and nearly was intercepted for Logan Ryan, who had no Pats between him and the end zone. He couldn’t hold on, though, and a Hail Mary bid two plays later fell incomplete.

Tennessee will receive the second-half kickoff.

Second quarter, 0:35, Titans 14-13: The Patriots’ failure to punch the ball in on three tries from the goal line proved costly.

The Titans proceeded to drive straight down the field to score a go-ahead touchdown before halftime.

Derrick Henry touched the ball on six of the seven plays on the drive, which he capped with a 1-yard scoring plunge. He’s already at 106 rushing yards on just 14 carries and also leads the Titans in receiving yards with 22. Those came on a screen pass that set up his touchdown.

Jonathan Jones, who’s giving up 57 pounds to the beastly back, made a nice — albeit ultimately meaningless — hustle play to knock Henry out of bounds at the 1.

Second quarter, 2:16, Patriots 13-7: The Patriots drove to the Titans’ 1-yard line but came away with only a field goal thanks to an impressive goal-line stand by Tennessee’s defense, with linebacker Rashaan Evans leading the charge.

Outside of that lackluster sequence, New England has run the ball extremely well in this first half and gotten several chunk plays in the screen game, as well. Running backs have accounted for 143 of the Patriots’ 199 total yards thus far.

Second quarter, 8:00, Patriots 10-7: Mohamed Sanu followed another Titans three-and-out with his best punt return as a Patriot, picking up 24 yards to the Tennessee 47.

Second quarter, 9:22, Patriots 10-7: Last week, the Patriots threw the ball to Elandon Roberts. On their latest drive, they tried handing the ball off to their linebacker/fullback on third-and-1. Didn’t work.

Too cute there for the pats. Chance to kinda bury them. Don?t love that call stalling the drive.

The Titans will take over at their own 10 after a nice punt by Jake Bailey.

Second quarter, 13:22, Patriots 10-7: Julian Edelman hasn’t been targeted yet in this game, but he just put the Patriots back ahead with a 5-yard jet-sweep touchdown.

It was the first career rushing touchdown for Edelman.

Sony Michel helped set up the score with a 25-yard dash off tackle, following blocks by Elandon Roberts, Isaiah Wynn and N’Keal Harry.

Sony Michel picks up 25 to put the @Patriots in Tennessee territory. #GoPats @Flyguy2stackz

Mohamed Sanu and Ben Watson also tallied one 11-yard reception apiece, and James White sprinted around the left end to pick up 14 yards on fourth-and-2.

The Patriots defense followed that up by forcing a three-and-out after an excellent tackle by Joejuan Williams on the ensuing kickoff. Adam Butler’s batted pass on third-and-3 forced the first punt of the game.

Safety Patrick Chung is questionable to return with an ankle injury.

Henry carried the ball seven times for 49 yards against New England’s base defense, with short completions to Jonnu Smith, Tajae Sharpe and MyCole Pruitt sprinkled in.

.@RyanTannehill1 delivers a strike to Firkser to put the @Titans ahead! #Titans #NFLPlayoffs

Brooks, who sat out last week with a groin injury, was in the game because starting safety Patrick Chung had suffered an injury one play earlier. He walked off gingerly flanked by members of the Patriots’ medical staff.

Stephon Gilmore and A.J. Brown — who nearly came to blows during joint practices this summer — needed to be separated after one play. Gilmore is not shadowing Brown, Tennessee’s No. 1 wideout.

First quarter, 12:37, Patriots 3-0: A remarkable catch by Ben Watson on third-and-10 extended what appeared to be a doomed opening drive for the Patriots.

That completion picked up 21 yards, and another on a screen pass to James White one play later picked up 29. An attempted double pass on the ensuing snap required a Tom Brady throwaway, and after a strong 7-yard run by Sony Michel, the Patriots settled for a 36-yard Nick Folk field goal that opened the scoring.

First quarter, 15:00, 0-0: The Titans won the toss and defer. The Patriots will receive the opening kickoff on a foggy night in Foxboro.

Jason McCourty (groin) is inactive yet again. The former Titan has played just eight defensive snaps since Week 11. The other six inactives are unsurprising healthy scratches.

Here are the Titans’ inactives:

4:05 p.m.: Tom Brady has arrived ahead of what could be his final home game at Gillette Stadium.

Brady is one of close to two dozen Patriots players, coaches and executives who could leave New England once this playoff run concludes. The quarterback’s contract is set to expire in March.

3:05 p.m. ET: Greetings from a soggy Gillette Stadium, where the New England Patriots are preparing to make their first appearance on wild-card weekend in 10 years.

Their opponent: the Tennessee Titans, who’ve gone 7-3 since Ryan Tannehill replaced Marcus Mariota at quarterback in Week 7. Tennessee boasts an explosive offense — only Baltimore and New Orleans have scored more points per game since Tannehill took the reins — that will challenge New England’s vaunted defense, which ranked first in points and yards allowed but struggled against weaker competition in Week 17.

Six Patriots players are listed as questionable for tonight’s game:

A report this morning from ESPN.com’s Mike Reiss suggested Brooks, who missed last week’s loss to the Miami Dolphins, could return for this game, which would help against a Titans team that frequently utilizes multiple tight ends.

The Titans will be without slot receiver Adam Humphries, who’s been ruled out with an ankle injury. Wideout/return man Kalif Raymond is doubtful with a concussion, and receiver Cody Hollister (ankle) and safety Dane Cruikshank (illness) are questionable.

Kickoff is set for 8:15 p.m. ET. Keep it locked here throughout the afternoon for full pregame coverage. 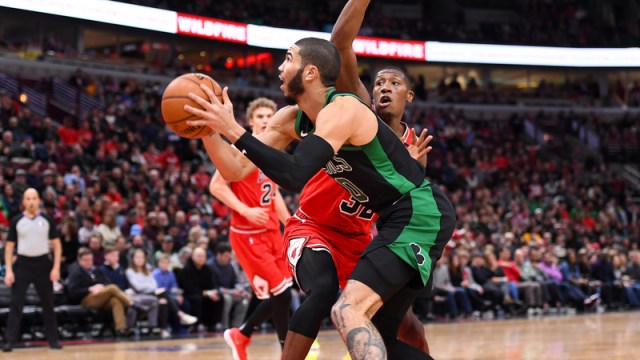 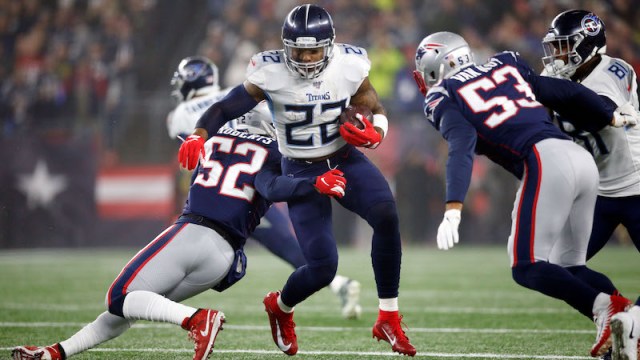 What Went Wrong In Patriots’ 20-13 Wild-Card Round Loss To Titans?