Michael Jordan’s NBA tenure is among the greatest in league history, but it didn’t come without some trials and tribulations.

These obstacles were covered in detail in the latest episodes of “The Last Dance,” ESPN’s 10-part documentary series on Jordan’s final season with the Chicago Bulls. Episodes five and six both featured a generally serious tone and included unapologetic candor from His Airness.

Without further ado, here were the five biggest takeaways from Night 3 of “The Last Dance.”

Paying It Forward
In addition to being touted as one of the best players in NBA history, the late Kobe Bryant also has been praised by countless players in today’s game for being a tremendous mentor.

Bryant, like Jordan, was as fierce of a competitor as they come, but that didn’t stop MJ from taking Kobe under his wing right from when the latter broke into the league in 1996. In fact, Bryant believes his wealth of success was due in part to Jordan’s guidance.

“I truly hate having discussions about who would win 1-on-1 or fans saying, ‘Kobe, you’d beat Michael 1-on-1,'” Bryant said. “I feel like, yo, what you get from me is from him. I don’t get five championships here without him ’cause he guided me so much and gave me so much great advice.”

Gambling P?r?o?b?l?e?m? Hobby
As the Bulls were in pursuit of their third consecutive NBA title, Jordan’s infamous vice was brought to the forefront.

Prior to Chicago’s Eastern Conference Finals Game 2 against the New York Knicks, it was revealed family and friends joined Jordan on a trip to Atlantic City, where some say the group was up gambling until the early hours of the morning. The Bulls went on to lose to the Knicks that night and fell into an 0-2 series hole.

Jordan also caught flak for his dealings with golf hustler James “Slim” Bouler, who once received a $57,000 check from MJ as a gambling debt payment. That figure pales in comparison to the one reported by the author of “Michael and Me,” Richard Esquinas, who claims the six-time champ at one point owed him over $1.2 million from wagers made on golf matches.

Jordan’s gambling itch never prompted troubling repercussions, however, which makes sense given his financial situation. When asked if he has a gambling problem, Jordan responded,  “No, because I can stop gambling. I have a competition problem, a competitive problem.”

True To Self
Jordan was not very in tune with politics during his playing career, much to the chagrin of many at the time.

MJ was criticized in 1990 for not publicly endorsing Harvey Gantt, who was trying to become the first African-American U.S. senatorial representative from North Carolina. Gantt, who was going up against the highly conservative and controversial Jesse Helms, surely could have benefited from the public backing of Jordan, an NC native who played collegiately for the Tar Heels.

Jordan instead made a private donation to Gantt’s campaign and once was heard among teammates saying, “Republicans buy sneakers, too” in jest. Gantt eventually lost out to Helms and did so again in 1996.

When pressed on the matter, Jordan stood his ground, explaining where his mind was at the time.

“I do commend Muhammad Ali for standing up for what he believed in, but I never thought of myself as an activist,” Jordan said. “I thought of myself as a basketball player. I wasn’t a politician when I was playing my sport, you know? I was focused on my craft. Was that selfish? Probably, but that was my energy. That’s where my energy was.”

Jordan continued: “The way I go about my life is I set examples and if it inspires you, great. I will continue to do that. If it doesn’t, maybe I’m not the person that you should be following.”

Mom Knows Best
Jordan, of course, is the face of one of the most iconic sneaker brands of all time. But had it not been for the advisory of his parents, MJ might have never teamed up with Nike.

When Jordan’s reps sought out a shoe deal for the star guard in the 1980s, the industry’s titan at the time, Converse, was out of the question. The brand already was repped by the likes of Magic Johnson and Larry Bird, so it wasn’t inclined to take on an up-and-comer.

Enter Nike, an upstart company that was keen on bringing in Jordan. The Bulls star, however, had his sights set on Adidas, so much so that he initially wasn’t even interested in taking a meeting with Nike. But Jordan’s mother wasn’t going to let her son have the opportunity go by the wayside.

“Mom, I don’t want to hear it. I know what I want to do. I’m not going to Nike, momma,'” Deloris Jordan recalled her son saying. “I said, ‘Michael, you have to give them an opportunity.'”

And the rest, as they say, is history.

Jordan-Thomas Feud, Cont.
The rivalry between Jordan and Isiah Thomas extended outside of the NBA.

Jordan headlined the 1992 United States men’s Olympic basketball team, known famously as the “Dream Team.” The squad included some of the best players to ever step foot on a court and often is regarded as the greatest basketball team ever assembled.

There was one glaring omission to the Dream Team, however.

Despite being one of the all-time great point guards, Isiah Thomas was not invited to join his fellow superstars in Barcelona. Many thought this was due to Jordan who, of course, has no love lost for the former Detroit Piston. While Jordan insists he had nothing to do with Thomas being left off the roster, he unsurprisingly believes Thomas not being included was for the best.

“I respect Isiah Thomas’ talent,” Jordan said. “To me, the best point guard of all time is Magic Johnson and right behind him is Isiah Thomas. No matter how much I hate him, I respect his game. Now, it was insinuated that I was asking about him, but I never threw his name in.

“Dream Team, based on the environment and the camaraderie that happened on that team, it was the best harmony. Would Isiah have made it a different feeling on that team? Yes.” 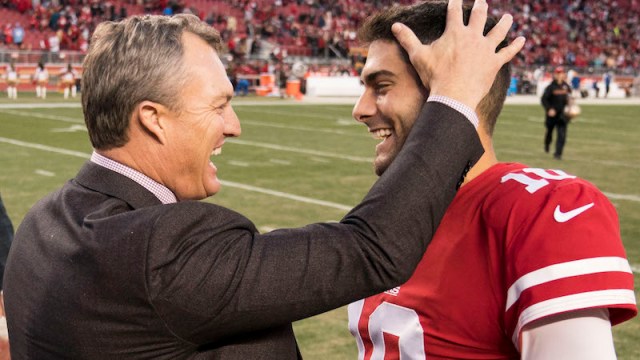 How 49ers Determined They Wanted Jimmy Garoppolo Over Tom Brady 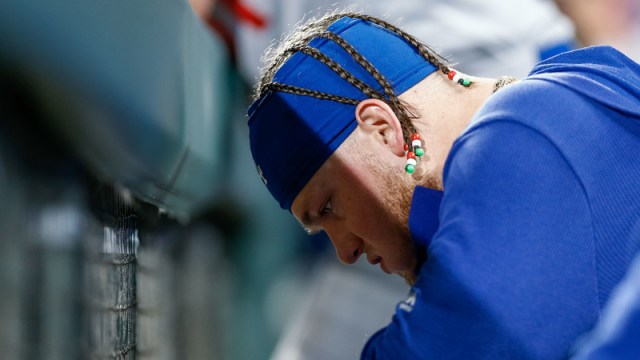