Bruins Wrap: Boston Moves On With 3-1 Game 5 Win Over Capitals Skip to content

The Boston Bruins have knocked off the Washington Capitals and are moving on to the second round.

Behind two goals from captain Patrice Bergeron, the B’s beat the Caps 3-1 on Sunday at Capital One Arena in Game 5 to secure the series win 4-1.

The Bruins entered the third period up 2-0, but a Conor Sheary goal 11 seconds in made for a thrilling final 20 minutes. Bergeron’s second tally, which came with 7:35 left in regulation, proved to be the dagger.

David Pastrnak had the game’s other goal.

Tuukka Rask made 40 saves on 41 shots for the Bruins. Ilya Samsonov turned away 16 shots for Washington.

HANGING ON
The first period ended scoreless, but the Capitals controlled play.

Boston basically was weathering a storm most of the period, as the Capitals got a number of decent chances, ultimately outshooting the Bruins 10-9 in the first 20 minutes.

The Capitals had three power plays, including a suspect roughing call on Brad Marchand, but Boston’s penalty kill, as was all series, was stout.

INCHING CLOSER
The Capitals not cashing in on their first-period opportunities came back to sink them, as the Bruins scored a pair in the second period.

Boston had just four shots in the second period (to Washington’s 20, no less), but cashed in on half of them. The first came just a few minutes after the start of the period, as Pastrnak danced through the attacking end.

In a combination between appalling defense from Nick Jensen and the Capitals defense, as well as high-end puck-handling from Pastrnak, the winger ended up unmarked on the doorstep and snuck a puck past Samsonov at 2:28.

Later in the period, there was a loose puck in the neutral zone that Mike Reilly, who had a fantastic game, ended up winning. He pivoted and zipped a pass to Bergeron, who quickly gained the offensive blue line. The captain took a few strides and fired a shot from the high slot that burned Samsonov at 14:05 to double Boston’s lead.

Though the Caps weren’t completely lifeless, it was clear the Bergeron goal had taken the wind out of their sails.

THAT’S ALL SHE WROTE
Washington made it a game for part of the third period, but ultimately Bergeron and the Bruins slammed the door shut to secure the series win.

The Capitals didn’t go down lightly, though. Just seconds after the period began, Sheary received a puck in tight and uncorked a shot that Rask turned away. However, he left a rebound, and Sheary had kept crashing towards the net, and the forward buried the loose change 11 seconds into the period to cut the Bruins’ lead to 2-1.

Bergeron, again, took the life out of Capital One Arena later in the period.

The middle stages of the period featured a bunch of wild, non-stop play. But with the puck pinballing around in the Bruins’ offensive zone, Bergeron gained possession and ripped the dagger past Samsonov with 7:35 left to play.

The Capitals made the Bruins sweat for a moment, when Lars Eller beat Rask on the near post with 5:37 to play. However, the goal was waved off for goalie interference, as Rask was pushed in his crease moments before the goal.

UP NEXT
The Bruins await the conclusion of the New York Islanders vs. Pittsburgh Penguins series, which is tied at two games apiece. Game 5 for that series will be Monday. 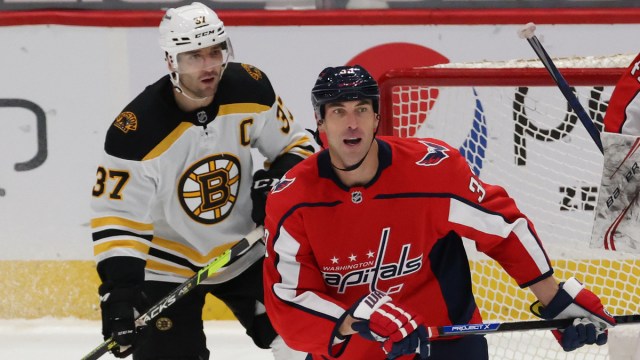 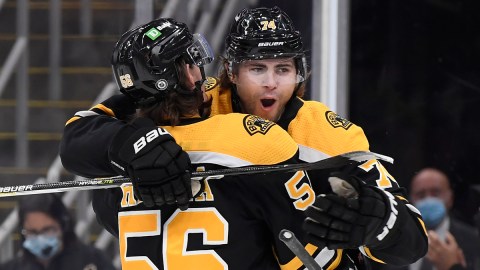